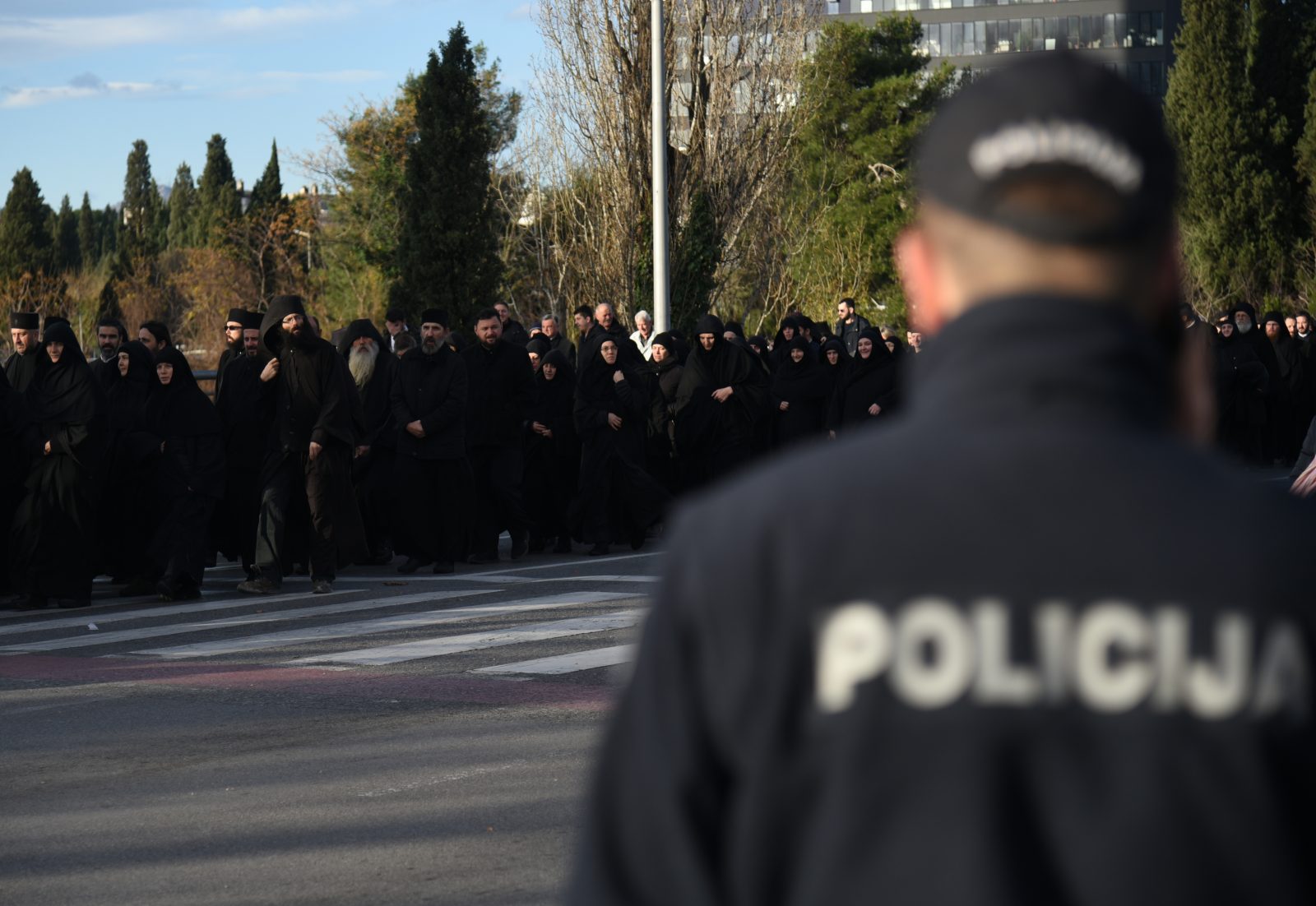 A police officer at the protest rally in Podgorica, Montenegro. Photo: EPA-EFE/BORIS PEJOVIC

As a clampdown continues on social media critics spreading ‘panic’, police have detained civic activist for a Facebook post predicting that a ‘war’ might break out soon.

Montenegro’s state prosecution on Tuesday ordered civic activist Vesko Pejak to be put into custody for 72 hours for causing panic and disorder over a Facebook post predicting “war in Montenegro” – and for claiming that officials were provoking citizens who opposed the recently adopted law on religion.

The law has angered the largest faith group in the country, the Serbian Orthodox Church, and tens of thousands of people have been marching twice weekly in the streets in protest against it.

The Serbian Church, SPC, says it is designed to strip it of its property and land, which the government denies. Opposition political movements are also regular participants in the anti-government rallies.

The Center for Investigative Reporting in Montenegro, CIN-CG, said that by arresting people solely for their thoughts, the government threatened freedom of thought and expression, which is one of the cornerstones of democracy.

“We appeal to all actors in the public arena to take the greatest responsibility regard to the situation and not to exacerbate tensions,” the CIN-CG press release said.

“We urge the authorities to release Pejak and to no longer stifle freedom of speech and freedom of movement,” a member of the Alternative movement, Nikola Bezmarevic, told the media.

The government has been clamping down hard lately on activists spreading “panic” on social media.

On January 24 police detained a well-known pro-Russian journalist, Igor Damjanovic, over his conversation on Facebook with another person who then filed a case against him. Damjanovic claimed the real reason for his detention was not his verbal exchange on Facebook but his long record of anti-NATO activism, which has irked the government.

On January 23 in a separate case concerning Facebook comments, police arrested Milija Goranovic from Niksic for allegedly insulting the country’s police chief, Veselin Veljovic. Media reports said Goranovic was fined 500 euros for telling Veljovic “not to talk rubbish” below a statement of the police director on Facebook.

One day after Goranovic was arrested, the US ambassador to Montenegro, Judy Rising Renke, reminded the government on twitter that freedom of speech was fundamental to democracy. “This really worries me. Public figures are routinely criticized and even insulted – it’s part of the job. I know. However, at the end of the day, we must defend the right to free speech,” she posted.

Two editors of local news websites, IN4S and Borba, Gojko Raicevic and Drazen Zivkovic, were detained on January 12 on suspicion of causing panic and public disorder. This was in connection with reports of an explosion at the Villa Gorica, a building in Podgorica used by the government for receptions. After they published their stories, some regional media republished the alleged information. The police later denied that any explosion had occurred and said that a minor electrical failure had occurred at the villa, which was soon repaired. They said Raicevic and Zivkovic were arrested for publishing information that had alarmed the public without checking the facts.

On January 5, the editor-in-chief of the Fos media website, Andjela Djikanovic was placed in detention for 72 hours for “causing panic and disorder” after claiming in an article that the government might call on security forces in neighbouring Kosovo to help quell Serbian Church supporters’ protests over the new legislation on religion.

The government has defended its tough response, however, saying it is coming under a systemic and organized attack. On January 14, the Culture Ministry said that the country had become the target of an organised “disinformation campaign” since it adopted the new law on religion. Authorities say they are the victims of a coordinated campaign to spread fake news, organised by a number of media outlets in the country and the region that are spreading religious and national hatred and violence.