‘It’ll be Bloody’: Under Jansa, Troubled Times for Slovenian Media 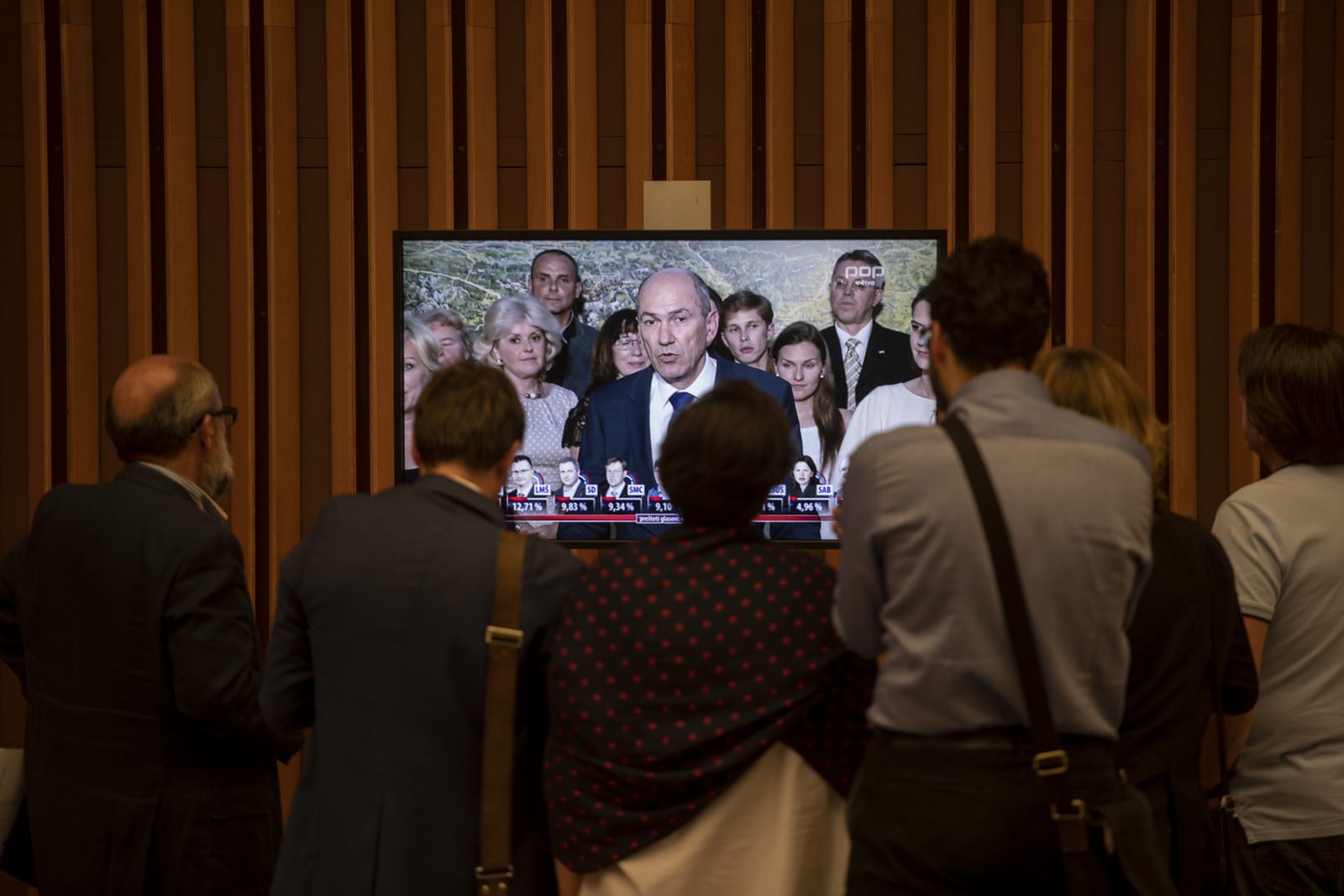 The spread of COVID-19 has coincided with the return to power of right-wing hardliner Janez Jansa. Slovenian journalists are bracing for a storm.

The spread of COVID-19 and the return to power of veteran right-winger Janez Jansa are contributing to an increasingly hostile environment for journalists in Slovenia, media watchdogs are warning.

Jansa, an anti-immigration ally of Hungarian Prime Minister Viktor Orban, returned for a third stint as prime minister on March 13, a little over a week after Slovenia confirmed its first case of the novel coronavirus that has since killed 79 people in the former Yugoslav republic.

He replaced Marjan Sarec, whose centre-left coalition fell in January. The change of power coincided with what the International Press Institute, IPI, says is an unprecedented wave of insults and online smear campaigns against journalists in Slovenia.

Jansa himself has taken to Twitter to denounce the Slovenian public broadcaster; his government has sought to portray mainstream media outlets as heirs of the Yugoslav-era communist security services, while the government’s Crisis Headquarters tasked with coordinating the fight against COVID-19 has retweeted anonymous attacks on investigative journalist Blaz Zgaga.

“This is, in a way, a defeat in the field of democracy,” said Slovenian political scientist Alem Maksuti. “[Slovenian] media are coming under tremendous pressure, while like any other media they must simply objectively inform the public what’s going on.”

“And once again this thesis has emerged that authoritarian regimes which want to establish greater power are taking on those who have different opinions,” Maksuti told BIRN. 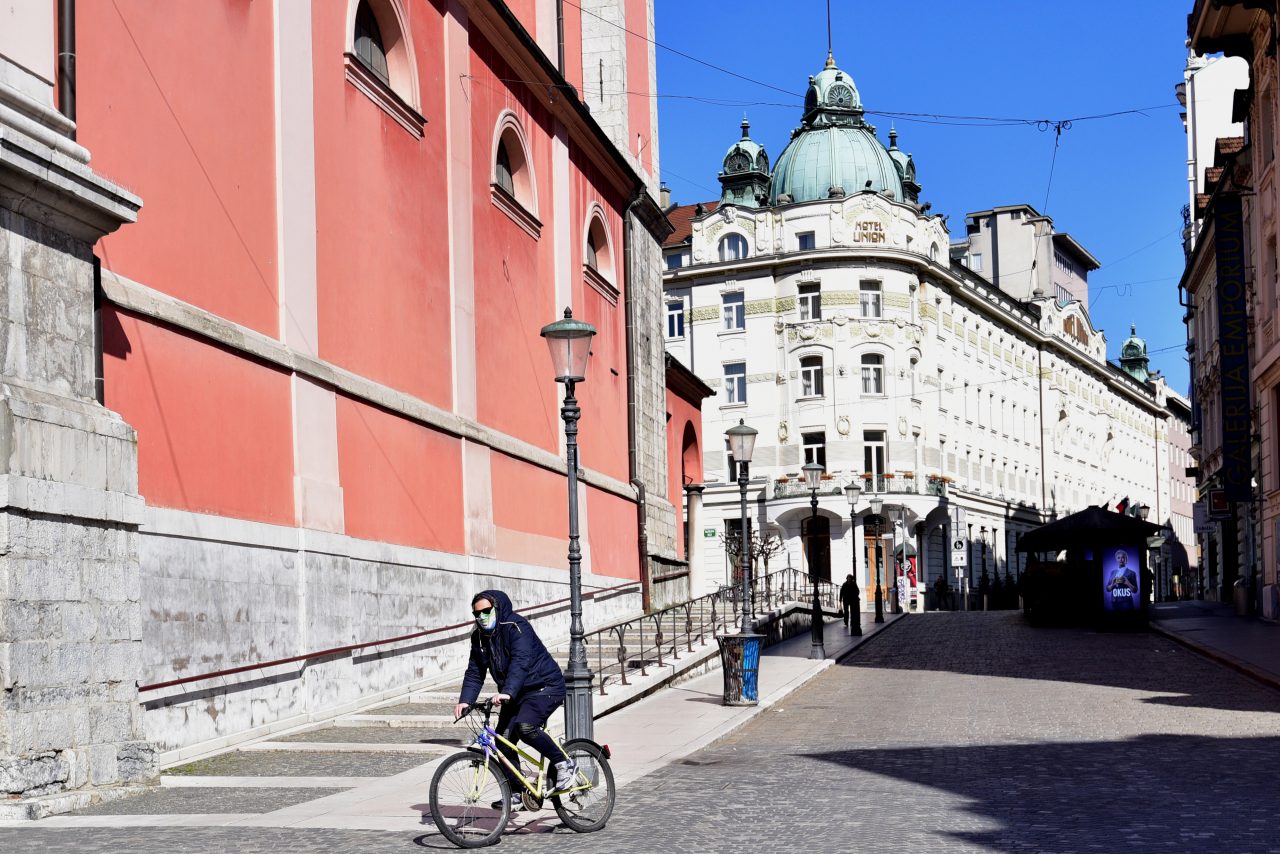 In mid-March, Zgaga, an investigative reporter and correspondent for the international media watchdog Reporters Without Borders, RSF, complained to IPI that he had been the target of a smear article in a news weekly close to Jansa’s Slovenian Democratic Party, SDS, after he had asked the government about the operations and structure of a newly-founded Crisis Headquarters created by the government to lead the fight against the COVID-19 pandemic.

The Headquarters did not respond. Instead, its official Twitter account retweeted an anonymous attack on Zgaga describing him as having “escaped from quarantine” and carrying a “COVID-Marx/Lenin virus,” a play on a common smear by the Slovenian right-wing against its opponents on the left or centre. Zgaga also received anonymous, online death threats.

On April 17, RSF and six other press freedom organisations urged the European Commission – the executive arm of the European Union, of which Slovenia is a member – to do everything in its power to guarantee the safety of the Zgaga and ensure that “death threats and attacks against him are treated with the utmost seriousness by the Slovenian authorities.”

“Despite the unprecedented context in which Slovenia and other countries currently find themselves, the COVID-19 crisis shouldn’t be an excuse to prevent journalists from doing their job,” RSF said, echoing the deep concern felt by media watchdogs over press freedoms across Central and Eastern Europe since the onset of the pandemic. 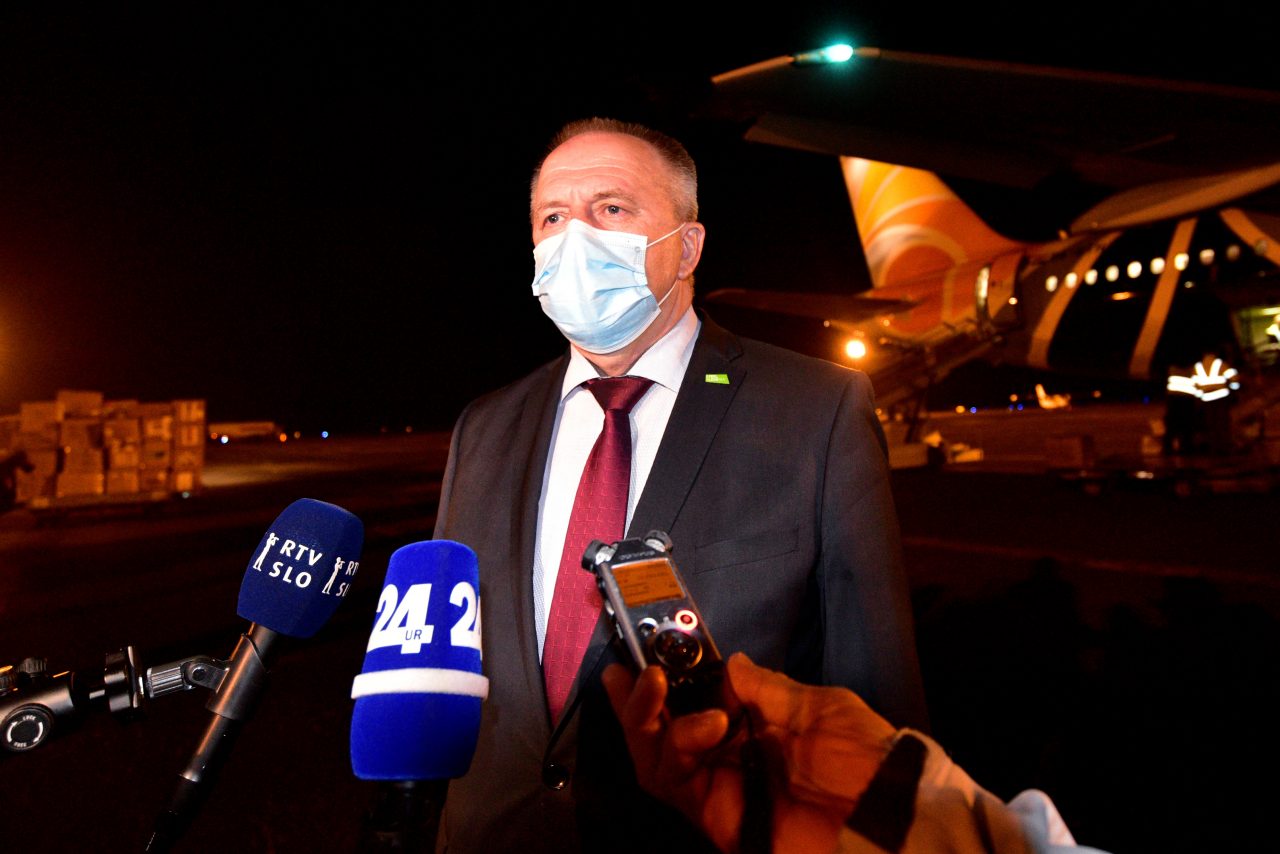 Slovenian Minister of Economic Development and Technology Zdravko Pocivalsek speaks to the media during the reception of the first batch of a seven-ton shipment of personal protection equipment from Quingdao, China. Photo: EPA-EFE/IGOR KUPLJENIK.

Zgaga, however, was not the only target.

On March 20, the Council of Europe’s Platform for the Protection of Journalism and Safety of Journalists reported that Jansa had used social media to accuse public broadcaster Radiotelevizija Slovenija, RTVS, of spreading lies about the government. He issued a veiled threat over its funding.

RTVS Director General Igor Kadunc denounced what he said were “grossly unjustified attacks” on RTVS coverage aimed to the “subordination of the central media to one political option.”

Spela Stare, secretary general of the Slovene Association of Journalists, DNS, noted that at the outset of the pandemic, the government had sought to halt journalists from asking questions at its regular COVID-19 press conferences. RTVS was supposed to simply broadcast the statements of speakers.

“Journalists could only send the questions in advance via email. No real-time questions,” Stare told BIRN. “We protested, of course, and demanded at least video conferences for questions.”

The government backed down, to a degree, allowing journalists to pose questions from a separate location or submit them in advance.

“Not ideal, but better than what was first announced,” Stare said, while noting that the opportunity for follow-up questions had clearly become limited.

For Slovenian media, trouble ahead

Not long after the protest from the Council of Europe’s protection of journalism platform, a reply appeared on the platform’s site from Slovenia’s mission to the CoE, questioning the journalistic standards of Slovenian media and claiming that “the majority of the main media in Slovenia have their origins in the former Communist regime and even in the late 1990s the positions of editors-in-chief were held by the former members of the infamous security service UDBA.”

The Slovene Association of Journalists denounced the letter as having “no basis in reality.”

“It only reflects the ideological views of the biggest government party and smears Slovenia’s reputation internationally,” the association said.

Maksuti said the government was trying to “invent an enemy that has been dead for years – Communism.”

Foreign Minister Anze Logar defended the wording of the response, which he said was drawn up by a government communications office, telling parliament that the government had faced significant criticism in the media in its first month in office.

Journalists he ran into, Logar said, “do not seem scared… I did not see fear in their eyes.”

With the next parliamentary election due in 2022, Maksuti said the future of Jansa’s four-party coalition government was hard to predict.

“I think politics will be closer to what we can see in Hungary, Poland or Slovakia,” he said, “where some of the civilisational steps we’ve made are becoming issues again – abortion, same-sex marriage and so on.”

Jansa’s government is working on a package of laws, part of which Maksuti said may seek to abolish licence fees for the public broadcaster and give more prominence and improved frequencies to media seen, he said, as “party extensions” of Jansa’s SDS.

“In the media field, it’ll be bloody,” Maksuti said.