Hungarian Coronavirus Bill Will Have “Chilling Effect” on Media 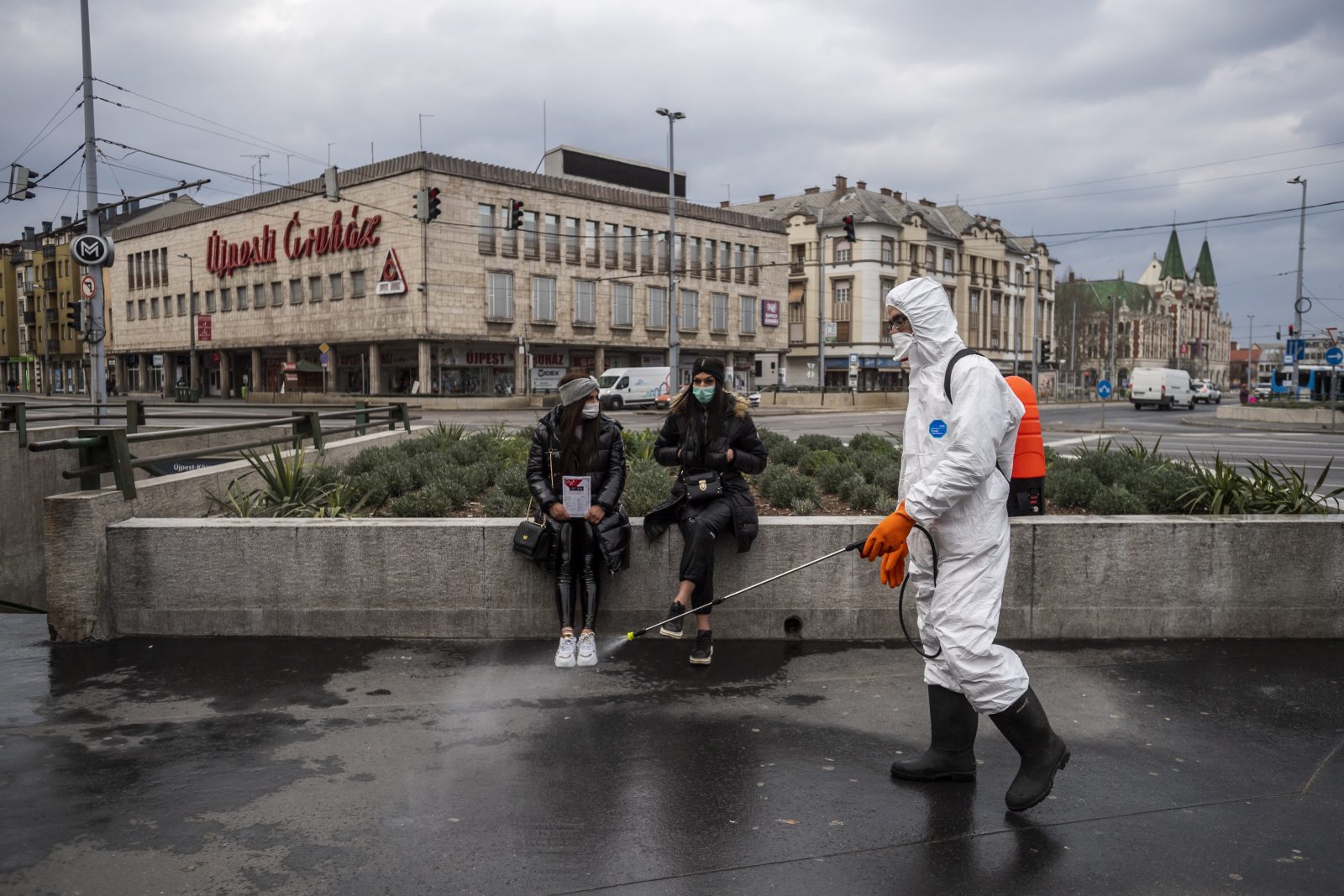 A municipal worker disinfects a street to prevent the spread of the coronavirus pandemic in Budapest, Hungary, 2020. Photo: EPA-EFE/Marton Monus HUNGARY OUT
Citing the fight against COVID-19, legislation before the Hungarian parliament will let Viktor Orban rule by decree and give authorities broad powers to crack down on media and dissent.

Rights groups warn that legislation submitted to the Hungarian parliament, giving the government of Viktor Orban unprecedented power of decree in the fight against COVID-19, would have a “chilling effect” on independent media in the country.

The ‘Bill on Protection against Coronavirus’ was submitted by Orban’s government with the justification that it must be free to act without consulting parliament to confront a virus that has so far, officially, infected at least 261 people in Hungary.

The bill submitted last week amends rules under a state of emergency to give the government the power to rule by decree and suspend any existing law. It would permanently amend the criminal law to introduce punishment of one to five years in prison for anyone convicted of spreading “falsehood” or “distorted truth” deemed to obstruct efforts to combat the pandemic.

No elections or referenda can be held for the duration of the state of emergency and only the government or a two-thirds majority in parliament can lift it. Orban’s right-wing Fidesz party holds such a supermajority.

The Hungarian Civil Liberties Union, HCLU, an NGO, warned of a devastating effect on Hungarian media after years of Fidesz rule during which right groups say the government has dismantled media freedoms and pluralism.

“Once the legislation enters into force, it could have a chilling effect, and its timing and social context could lead to self-censorship among journalists,” the group said.

The way the bill is worded means someone could be prosecuted for ‘obstructing’ any number of government measures – from healthcare to education, border control and the economy – justified by the fight against COVID-19.

HCLU cautioned in particular that the term ‘distorted’ could be interpreted in a range of ways by the courts and “could be applicable even to someone who disputes the credibility of official statements.” Entire outlets face being shut down if police seize servers as evidence.

Media pluralism has been in decline for years in Hungary, with pro-government outlets now dominating the media landscape.

“Orban’s terrible track record on press freedom creates the suspicion that the law is aimed at the last remnants of an independent press in Hungary,” Kim Lane Scheppele, an expert on authoritarian regimes at Princeton University, wrote on March 21.

The bill would give Orban “dictatorial powers”, she wrote, and “end the appearance of constitutional and democratic government.”

On Monday, the opposition in parliament blocked a government move to pass the bill in an urgent procedure, but Fidesz is expected to push it through next week using its two-thirds supermajority.

A spokesman for the European Commission declined to comment on the bill directly, but noted that “all emergency measures should be temporary in nature and address a particular crisis situation.”

“Democracy cannot work without free and independent media,” said the spokesman, Christian Wigand. “In times of crisis it is more important than ever that journalists can do their job properly, precisely so to avoid disinformation.”

Any extraordinary measures during a pandemic “should always ensure that fundamental rights, rule of law and democratic principles are protected,” Juan Fernando López Aguilar, chair of the parliament’s Civil Liberties Committee, said in a statement.

Aguilar called on the Commission to look at whether the bill “complies with the values enshrined in Article 2 of the Treaty on European Union and to remind member states of their responsibility to respect and protect these common values.”

In a letter to Orban, Council of Europe Secretary General Marija Pejcinovic Buric said that an indefinite and uncontrolled state of emergency “cannot guarantee that the basic principles of democracy will be observed and that the emergency measures restricting fundamental human rights are strictly proportionate to the threat which they are supposed to counter.”

“…democratic debate in national parliaments, in the media and the internet, as well as access to official information and documents are essential elements of any free and democratic order and of particular importance in crisis situations to maintain trust and confidence within society,” she wrote.