Freedom on the Net: Tracking the Global Decline 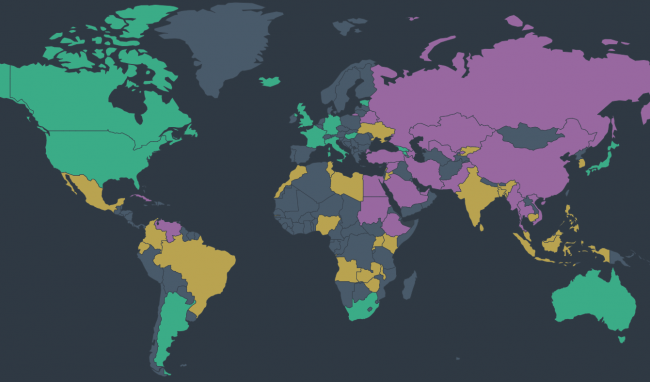 Freedom on the Net is a comprehensive study of internet freedom in 65 countries around the globe, covering 87 percent of the world’s internet users. It tracks improvements and declines in internet freedom conditions each year. The countries included in the study have been selected to represent diverse geographical regions and regime types. In-depth reports on each country can be found at freedomonthenet.org.

More than 70 analysts contributed to this year’s edition, using a 21-question research methodology that addresses internet access, freedom of expression, and privacy issues. In addition to ranking countries by their internet freedom score, the project offers a unique opportunity to identify global trends related to the impact of information and communication technologies on democracy. Country-specific data underpinning this year’s trends is available online. This report, the ninth in its series, focuses on developments that occurred between June 2018 and May 2019.

Of the 65 countries assessed, 33 have been on an overall decline since June 2018, compared with 16 that registered net improvements. The biggest score declines took place in Sudan and Kazakhstan followed by Brazil, Bangladesh, and Zimbabwe.

In Sudan, nationwide protests sparked by devastating economic hardship led to the ouster of President Omar al-Bashir after three decades in power. Authorities blocked social media platforms on several occasions during the crisis, including a two-month outage, in a desperate and ultimately ineffective attempt to control information flows. The suspension of the constitution and the declaration of a state of emergency further undermined free expression in the country. Harassment and violence against journalists, activists, and ordinary users escalated, generating multiple allegations of torture and other abuse.

In Kazakhstan, the unexpected resignation of longtime president Nursultan Nazarbayev—and the sham vote that confirmed his chosen successor in office—brought simmering domestic discontent to a boil. The government temporarily disrupted internet connectivity, blocked over a dozen local and international news websites, and restricted access to social media platforms in a bid to silence activists and curb digital mobilization. Also contributing to the country’s internet freedom decline were the government’s efforts to monopolize the mobile market and implement real-time electronic surveillance.

The victory of Jair Bolsonaro in Brazil’s October 2018 presidential election proved a watershed moment for digital election interference in the country. Unidentified actors mounted cyberattacks against journalists, government entities, and politically engaged users, even as social media manipulation reached new heights. Supporters of Bolsonaro and his far-right “Brazil over Everything, God above Everyone” coalition spread homophobic rumors, misleading news, and doctored images on YouTube and WhatsApp. Once in office, Bolsonaro hired communications consultants credited with spearheading the sophisticated disinformation campaign.

In Bangladesh, citizens organized mass protests calling for better road safety and other reforms, and a general election was marred by irregularities and violence. To maintain control over the population and limit the spread of unfavorable information, the government resorted to blocking independent news websites, restricting mobile networks, and arresting journalists and ordinary users alike.

China confirmed its status as the world’s worst abuser of internet freedom for the fourth consecutive year. Censorship reached unprecedented extremes as the government enhanced its information controls in advance of the 30th anniversary of the Tiananmen Square massacre and in the face of widespread antigovernment protests in Hong Kong. In a relatively new tactic, administrators shuttered individual accounts on the hugely popular WeChat social media platform for any sort of “deviant” behavior, including minor infractions such as commenting on environmental disasters, which encouraged pervasive self-censorship. Officials have reported removing tens of thousands of accounts for allegedly “harmful” content on a quarterly basis. The campaign cut individuals off from a multifaceted tool that has become essential to everyday life in China, used for purposes ranging from transportation to banking. This blunt penalty has also narrowed avenues for digital mobilization and further silenced online activism.

Internet freedom declined in the United States. While the online environment remains vibrant, diverse, and free from state censorship, this report’s coverage period saw the third straight year of decline. Law enforcement and immigration agencies expanded their surveillance of the public, eschewing oversight, transparency, and accountability mechanisms that might restrain their actions. Officials increasingly monitored social media platforms and conducted warrantless searches of travelers’ electronic devices to glean information about constitutionally protected activities such as peaceful protests and critical reporting. Disinformation was again prevalent around major political events like the November 2018 midterm elections and congressional confirmation hearings for Supreme Court nominee Brett Kavanaugh. Both domestic and foreign actors manipulated content for political purposes, undermining the democratic process and stoking divisions in American society. In a positive development for privacy rights, the Supreme Court ruled that warrants are required for law enforcement agencies to access subscriber-location records from third parties.

Only 16 countries earned improvements in their internet freedom scores, and most gains were marginal. Ethiopia recorded the biggest improvement this year. The April 2018 appointment of Prime Minister Abiy Ahmed led to an ambitious reform agenda that loosened restrictions on the internet. Abiy’s government unblocked 260 websites, including many known to report on critical political issues. Authorities also lifted a state of emergency imposed by the previous government, which eased legal restrictions on free expression, and reduced the number of people imprisoned for online activity. Although the government continued to impose network shutdowns, they were temporary and localized, unlike the nationwide shutdowns that had occurred in the past.

Other countries also benefited from an opening of the online environment following political transitions. A new coalition government in Malaysia made good on some of its democratic promises after winning May 2018 elections and ending the six-decade reign of the incumbent coalition. Local and international websites that were critical of the previous government were unblocked, while disinformation and the impact of paid commentators known as “cybertroopers” began to abate. However, these positive developments were threatened by a rise in harassment, notably against LGBT+ users and an independent news website, and by the 10-year prison term imposed on a user for Facebook comments that were deemed insulting to Islam and the prophet Muhammad.

In Armenia, positive changes unleashed by the 2018 Velvet Revolution continued, with reformist prime minister Nikol Pashinyan presiding over a reduction in restrictions on content and violations of users’ rights. In particular, violence against online journalists declined, and the digital news media enjoyed greater freedom from economic and political pressures.

Iceland became the world’s best protector of internet freedom, having registered no civil or criminal cases against users for online expression during the coverage period. The country boasts enviable conditions, including near-universal connectivity, limited restrictions on content, and strong protections for users’ rights. However, a sophisticated nationwide phishing scheme challenged this free environment and its cybersecurity infrastructure in 2018.