Social Media a Help and Hindrance in Balkan Coronavirus Fight 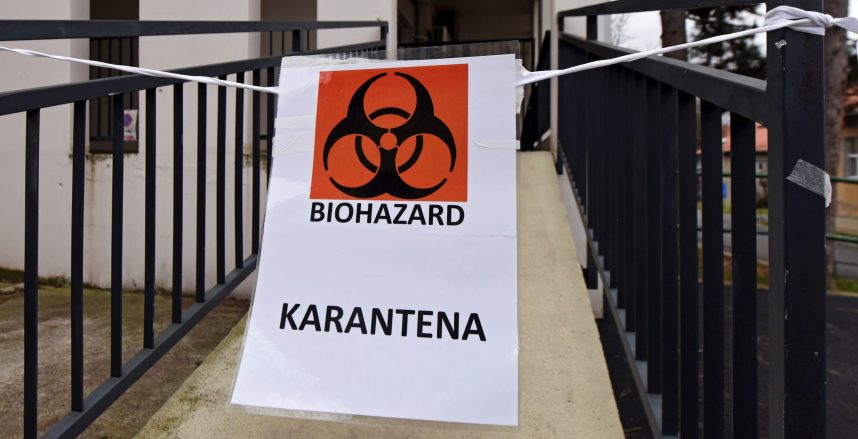 Exterior view on the hospital and clinic for infections ‘Fran Mihaljevic’ in Zagreb, Croatia. Photo: EPA-EFE/ANTONIO BAT
Coronavirus rumours are spreading like wildfire on social media in the Balkans, while governments, scientists and concerned citizens use the same medium to keep people better informed.

Serbia has no confirmed cases of coronavirus yet, but on Tuesday a WhatsApp voice message began doing the rounds on social media claiming several people had already died from the virus in the capital, Belgrade.

“Doctors are strictly forbidden to talk about the virus,” the woman is heard saying on the message, which was published on several Serbian news portals.

A similar thing happened in neighbouring Croatia, where another WhatsApp message contained the claim that the first case had been recorded in the coastal city of Split, before authorities actually confirmed the first case in the capital, Zagreb, on February 25.

With its epicentre in Italy, Europe is grappling to contain the spread of Covid-19. In the Balkans, cases have been confirmed in Croatia, North Macedonia and Romania.

Governments and concerned experts and citizens in the region and elsewhere are taking to the Internet, social media and mobile phone messages to spread information.

But likewise they face what Italy’s foreign minister, Luigi Di Maio, has called an “infodemic” of false information and scaremongering in the media and online.

In Serbia, the interior ministry said on Wednesday that its Department of High-Tech Crime was trying to identify the women who made the WhatsApp recording claiming that coronavirus had already claimed its first victims in the country.

In Albania, prosecutors on February 24 announced investigations into what they called the “diffusion of fake information or announcements in any form aimed at creating a state of insecurity and panic among the people.”

Scientist: Behaviour ‘not in line with magnitude of danger’

Serbia’s Health Ministry has launched a website dedicated to the coronavirus outbreak, regularly posting updates, news, advice, contacts and warnings for those coming to Serbia from affected areas.

On Wednesday in Moldova, the government began sending mobile phone text messages telling Moldovans what symptoms to look out for and what steps they should take if they suspect they may have contracted the respiratory virus.

“Take care of your health. Call your family doctor immediately if you have a fever or cough. If you have returned from areas with Coronavirus and feel ill, call 112,” the SMS reads.

Croatian scientist Igor Rudan of the Centre for Global Health Research at the University of Edinburgh, Scotland, said on Wednesday the state of panic in Europe did not reflect the level of threat posed by Covid-19.

Even if the virus were to spread throughout Croatia, he wrote on Facebook, “the casualties should be at least roughly comparable with the number of cases of death from the flu or with the number of road traffic fatalities during the same period.”

“This panic is triggered by the persistent media coverage… rather than by generally accepted and scientifically-based knowledge about the coronavirus,” Rudan wrote.

“If you started behaving differently than you did during the winter months, during the flu epidemic, for example, collecting food supplies or wearing masks on the streets, this is not the kind of behaviour that reflects the actual magnitude of the danger.”

The Covid-19 outbreak originated in the Chinese city of Wuhan in late December.

According to the World Health Organisation, there are now more than 82,000 confirmed cases in 45 countries.

In the Balkans, there are three confirmed cases in Croatia, one in North Macedonia and one in Romania. More than 180 people are under supervision in Montenegro. In Serbia, 20 people have tested negative for the virus, while several Serbian citizens who recently travelled to affected areas are in quarantine in Belgrade and the nearby town of Sabac, the public broadcaster reported.