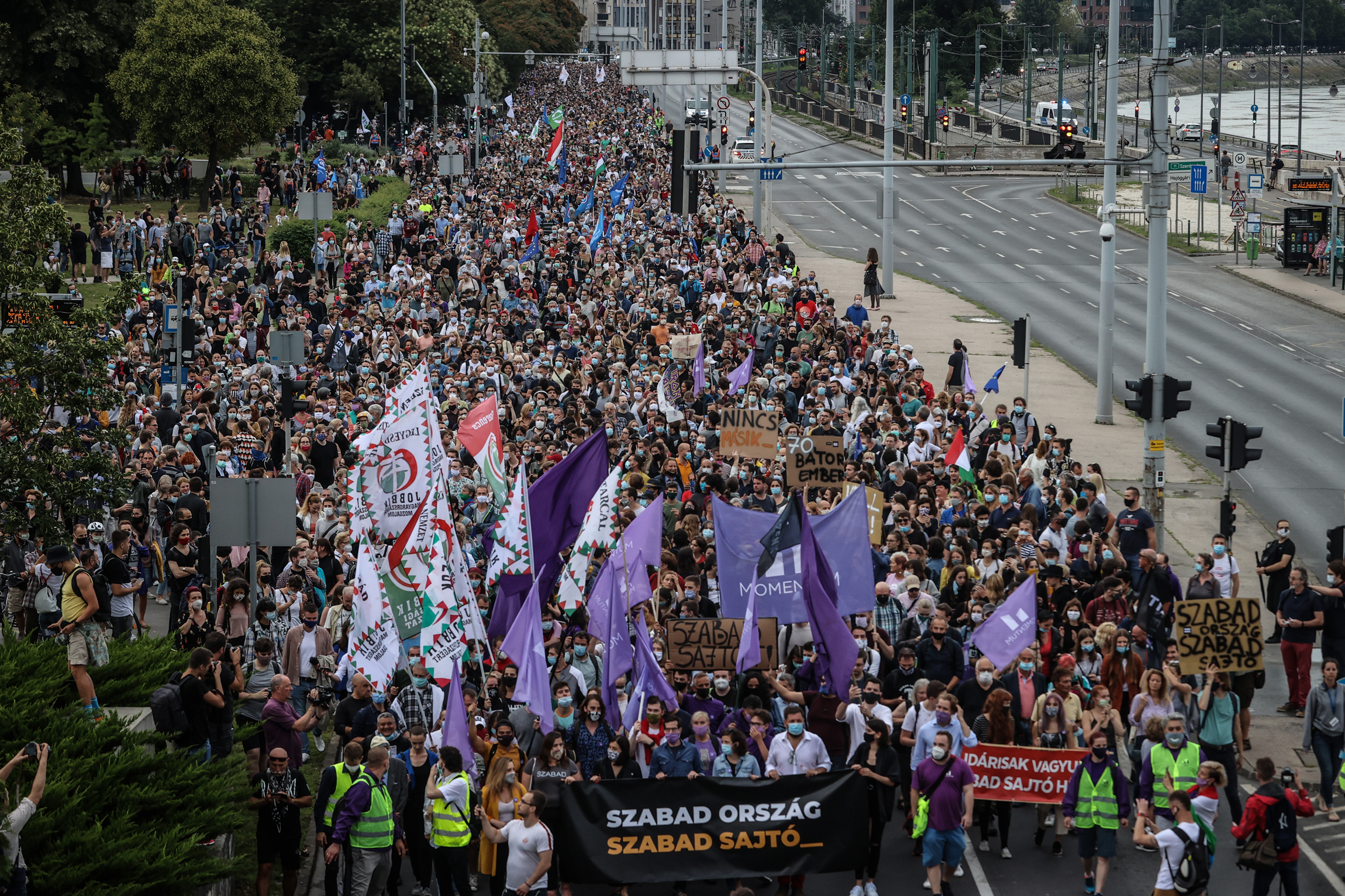 Hungarians demonstrated for media freedom after the en masse walkout of Index journalists a year ago. Photo: Istvan Huszti

A year on from the mass walkout by journalists of Index over threats to editorial independence, their new creation Telex is defying Hungary’s hostile media environment.

Veronika Munk sits in front of her computer in a somewhat rundown apartment-office in Budapest. She frowns as she reads the text in front of her, but in general she looks satisfied. Munk and her colleagues at Telex have achieved what few people in Hungary thought possible: they managed to build a completely new media outlet from scratch in 10 months mostly financed by readers, defying the hostile media environment that exists in Hungary.

On July 24 last year, Munk and her colleagues made international headlines when they staged a dramatic collective walk-out from Hungary’s then-leading independent news site Index. “All of a sudden, instead of writing the news, we had become the news,” she tells BIRN.

About 90 of the Index journalists resigned en masse following the sacking of editor-in-chief Szabolcs Dull. In the lead-up to his dismissal, Dull had been warning that the independence of the editorial team was in danger and he moved the “freedom barometer” on the homepage of Index to “in danger”.

The journalist resignations made the news around the world and thousands of people took to the streets of Budapest to demand a free press and a ‘new Index’.

“It was a critical situation, and I tried to keep a cool head,” says Munk, who was Index’s deputy editor-in-chief and now leads Telex as co-editor. “I felt responsible for the team and all I knew was that we wanted to stay together. But on the other hand, I remember I felt an immense sadness and weariness – I didn’t even go to the demos because I was so tired.”

Munk has been a journalist all her adult life. She was at Index for 18 years, working her way up from intern to deputy editor-in-chief, and witnessed how the ruling Fidesz party has gradually assumed control over the bastions of Hungary’s independent press since it came to power in 2010.

Using a mix of restrictive media laws and deep-pocketed friendly oligarchs, the party has seized control of major television and radio stations, news portals, and print media publishers, to the point where independent analysis this year showed that Orban allies exert control over a majority of the country’s 88 most influential media outlets.

Index had fended off repeated attempts by government-allied oligarchs to influence its content. But after the municipal elections in 2019, when the Hungarian opposition scored some unexpected victories, most notably in Budapest, the Fidesz leadership reportedly decided to increase the pressure on Index, to mute critical voices ahead of the 2022 general election.

Index’s Achilles’ heel was its dependence on its sales house – responsible for advertisements and revenues – which was acquired in 2018 by businessmen close to the government, who started to apply pressure on the editorial department.

A year ago, Munk told BIRN that, “it was not the classical censorship on the content that we encountered, but a constant pressure on changing our editorial structure.”

The collective resignation was a desperate cry for help; and the project to set up a new outlet was a race against time. “It was clear from the very beginning that we had to react fast. The pressure was strong both inside, from the colleagues, and outside, from society,” Szabolcs Dull, the other co-editor of Telex, tells BIRN.

Dull remembers that the gestures of solidarity from society at large were heart-warming. “In shops or in the market – wherever I went, people were constantly asking me about the ‘new Index’. Once I was sitting in a restaurant and somebody sent a bottle of wine over to show his support. But we were also aware the we cannot make an Index 2.0 – it should be something different.”

A year in the making

Telex was launched in October and became an instant hit. After less than 10 months in operation, it boasts 600,000 unique users, and is now one of the media market leaders in Hungary. Out of the original Index staff, the founders have managed to employ 72 colleagues, the vast majority of whom are on full-time contracts.

Telex is financed mostly by its readers, with a smaller share of revenue coming from advertising. According to its latest “Transparency Report”, revenue from donations was 2.3 million euros to the end of April – the single biggest donor being Czech businessman Zdenek Bakala with 200,000 euros – and another 400,000 euros from advertising. Over 50,000 people support Telex, in most cases with small donations, which provides a sustainable basis, though the founders won’t rule out a subscription-based model in the longer run.

“What happened at Index was truly a turning point for the Hungarian media landscape. People suddenly became aware that information and content is not free of charge: somebody has to pay the price: either it is the reader, the advertisers or political circles that must foot the bill. Here at Telex, we believe it is not absolutely necessary to make either political or business deals; we would much rather serve our readers’ interest,” Dull says.

Judging from the meteoric growth of its readership, Telex’s readers are happy with the new site so far. But politics is another matter. Telex journalists have become used to being ignored by government politicians for some time; the minister in charge of the cabinet, Antal Rogan, who also oversees government communications, once famously said he does not know what Telex is. It is not unusual for Fidesz politicians to refer to critical news sites as “blogs”, in a deliberate attempt to undermine their importance and credibility.

When Telex reached around 400,000 readers, the government’s attitude changed markedly. “From the very beginning, we were sending questions to the ministries and to government politicians, but we rarely received any answer. This is, of course, nothing new for the critical media in Hungary,” Munk says.

“But now some Fidesz politicians are already talking to us, not from the first tier, but from the second; some even give us interviews. We also see they are closely monitoring what we publish,” she says.

Telex’s tagline – “critical, curious and correct” – will remain the journalists’ guiding light even in the case of a change in government in Hungary next year.

Munk vehemently rejects the label of opposition or left-wing journalist. She says it is understandable that politicians are interested in framing the narrative in a way they find beneficial, but journalists should go after the news, and what’s interesting and important for their readers, regardless of political colours.

What makes the Index/Telex story special is the courage of these young people, Ilona Kocsi, president of the National Association of Hungarian Journalists (MÚOSZ), tells BIRN.

In most cases where the government took over or destroyed a critical media outlet, its journalists scattered, pursuing individual career paths. There have been some cases where a new independent outlet was established, though only with a handful of the original journalists. Telex was entirely different – this was the first time when an entire team resigned in protest, stayed together and proved that even in the current hostile media environment, an alternative, independent news site could be built.

“The decisive difference is that this was not a one-man show, but a collective action, with a community which had faith in itself and had even the courage to take on risks,” Kocsi says.

In broader terms, it could also indicate a generational change is in the air. Not everybody is ready to succumb to Fidesz’s bullying power; now there is an example of Fidesz’s dominance being challenged and fought off.