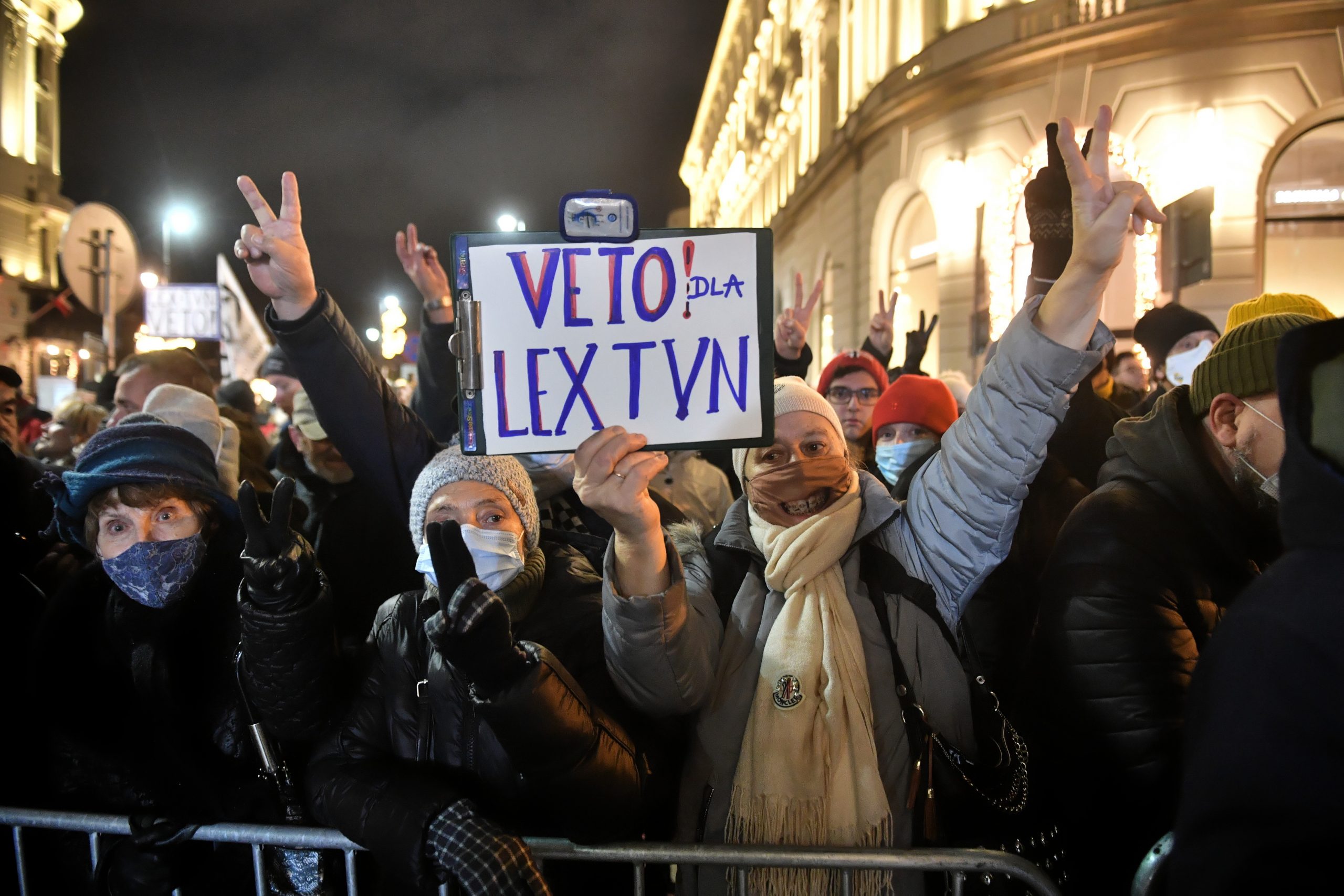 Supporters and members of opposition parties take part in a protest against the new media law in Warsaw. Photo: EPA-EFE/Radek Pietruszka.

Parliament on Friday passed a law banning foreign ownership of media in Poland – especially designed, it appears, to close a prominent TV station, TVN, that has angered the authorities.

Poles protested in 126 towns across the country over the weekend against what has been dubbed “Lex TVN”, a law prohibiting ownership of media operating in Poland by companies outside the European Economic Area – the European Union plus Norway, Iceland and Liechtenstein.

The law only needs the signature of President Andrzej Duda to come into force. In the past, he expressed reservations about greenlighting it straight away.

Ever since it was proposed in the summer, the law was understood to be targeting TVN, the largest private television station in Poland, owned by US company Discovery, Inc. and which often criticises the ruling Law and Justice Party, PiS.

Both the EU and the US have voiced concern. US State Department spokesman Ned Price’s statement on Friday said: “The United States is deeply troubled by the passage in Poland today of a law that would undermine freedom of expression, weaken media freedom, and erode foreign investors’ confidence in their property rights and the sanctity of contracts in Poland.”

“Once this bill becomes a law, the Commission will not hesitate to take action in case of non-compliance with EU law,” Vera Jourova, European Commission Vice-President for Values and Transparency warned in a statement.

TVN is owned by Discovery via a company registered in The Netherlands, but the new bill would make it impossible for TVN to operate as before even with this ownership structure.

Discovery on Friday urged President Duda not to sign the bill. Over the summer, the company had indicated it would fight back, possibly taking legal action under the terms of a longstanding bilateral treaty between the US and Poland.

The adoption of “Lex TVN” forms part of an ongoing assault on media freedom in Poland ever since PiS came to power in 2015.

The governing party first established political control over public media, then rechannelled public advertising away from independent media to the channels it controls; and, at the end of 2020, the state-controlled energy giant PKN Orlen took over the company owning most local and regional media in the country.

By Monday morning, 2 million people had signed an appeal to President Duda not to pass the law, which the text describes as an attack not only on media freedom but also on democracy.