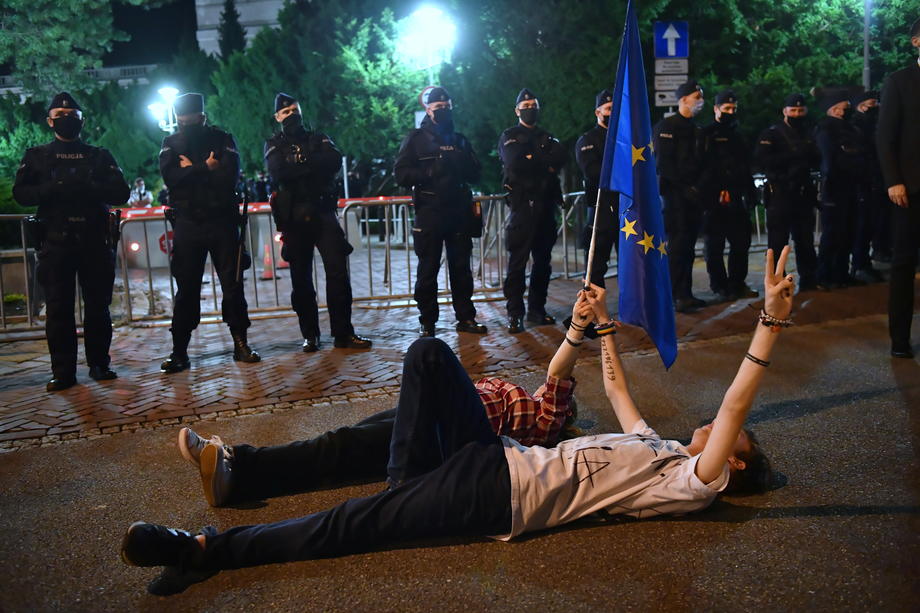 Supporters and members of opposition parties take part in a protest against the amendment to the Broadcasting Act in front of the Polish parliament building in Warsaw, Poland, 11 August 2021. EPA-EFE/Piotr Nowak

Despite losing its parliamentary majority, Poland’s ruling party managed to force through a media law that could spell the end of the largest private television station in the country.

After a stormy day in the Polish parliament, Law and Justice (PiS) finally managed to scrape enough support late on Wednesday evening to pass a law that will prevent companies outside the European Economic Area from owning television stations in Poland.

The law is seen as a move to further restrict media pluralism in the country and directly targeted at TVN, the largest private television station in the country, owned by the US-based Discovery Inc., whose news coverage has been critical of the governing party. It is also a direct snub to the Biden administration, which responded to the passing of the law with a harsh statement arguing it would harm Poland’s media environment, its investment climate and even relations with its western allies.

On Tuesday, the PiS leadership decided to fire from the government Jaroslaw Gowin, the deputy prime minister and leader of Agreement, one of two junior coalition partners of PiS. Gowin had been a thorn in the side of PiS leader Jaroslaw Kaczynski for some time, blocking presidential elections from happening by post back in 2020 and, more recently, opposing the TVN law and the government’s new signature program, the Polish Deal, designed to help Polish working families and win back waning support for the nationalist-populist government.

Without Gowin’s 13 MPs or even some of them, PiS has lost its thin parliamentary majority, which stood at 235 out of 460 seats.

Nevertheless, the party leadership decided to push ahead with the controversial law on Wednesday. Demonstrations in solidarity with TVN were organised in Warsaw and tens of other Polish towns.

In a surprise development on Wednesday afternoon, the opposition managed to pass a motion introduced by the chairman of the Polish People’s Party, Wladyslaw Kosiniak-Kamysz, which asked for the TVN law vote to be postponed to September. Five parliamentarians from Gowin’s faction and four from the group of maverick politician Pawel Kukiz backed the opposition on this.

There were cheers from the opposition ranks in the parliament upon the announcement of the vote, as this would have been the first major occasion when PiS was defeated in the lower house on a key bill.

But the day was far from over. In what is no longer an unusual practice for PiS, the party’s lawmakers first called for a break, and then invoked anonymous legal experts to claim the vote had been improper in order to force a repeat of the failed vote. By the evening when the poll was repeated, three MPs from the Kukiz’15 group, including its leader Pawel Kukiz, had switched sides to PiS. Kukiz himself pressed the button while opposition MPs shouted “traitor” at him across the hall.

The opposition-controlled Senate is now expected to reject the TVN bill, which the Sejm can later overrule with an absolute majority. In light of this week’s developments, it seems unclear whether PiS can pull that off in the Sejm.

The US, which is a key military and economic partner for Poland, had been putting pressure on Warsaw to leave TVN alone. In a statement following the vote, US Secretary of State Antony Blinken decried the legislation, saying: “Poland is an important NATO ally that understands the Transatlantic Alliance is based on mutual commitments to shared democratic values and prosperity. These pieces of legislation run counter to the principle and values for which modern, democratic nations stand.”