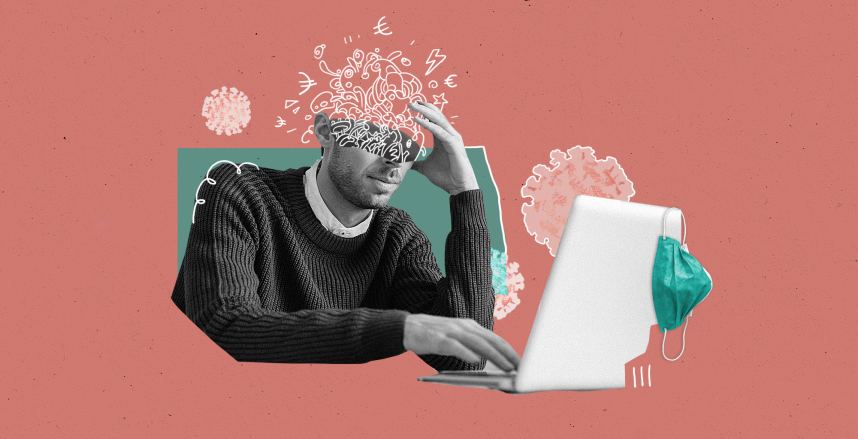 Illustration: Igor Vujcic
A BIRN research of the working conditions facing journalists in the Balkans since the onset of the COVID-19 pandemic makes for grim reading.

Given the low rates of pay, long hours and stress, journalism was never the most coveted career in the Balkans. But now a survey of media workers in the region shows that COVID-19 has made their working lives a whole lot worse.

By the nature of the job, most journalists can ill-afford to stay at home. At work, however, they face a constant balancing act between getting the story and protecting their health and the health of their loved ones.

While many aspects of life have slowed to a halt, the news cycle has not, but now journalists face the unenviable task of getting to grips with the complexity of the pandemic and explaining it to their viewers or readers, while weeding out fake news and conspiracy theories.

The line between work hours and personal time has become increasingly blurred, exposing journalists to mental health issues the scale of which experts say has still to be fully understood.

And on top of all that, governments and state bodies across the Balkans have restricted the flow of information to the media, making it increasingly hard for journalists to do their jobs.

“Depression could emerge as a concern later on,” said Gentiana Begolli Pustina, head of the Association of Journalists of Kosovo, AJK.

“Right now journalists have other existential problems. They go to work and worry they might lose their job. They have no time to think about depression or stress. We will feel the consequences at a later stage.”

Between mid-April and mid-May last year, BIRN surveyed media workers in Serbia, Albania, Bosnia and Herzegovina, Montenegro and North Macedonia, asking them how the COVID-19 pandemic had changed their work and lives with a focus on financial problems, workload, mental health issues and cooperation with public officials.

Among the findings were:

– A majority of media workers fear for their living standards, with almost two-thirds ranking financial support as a serious need.

– More than 60 per cent on average said that they had ‘more’ or ‘much more’ work than usual. The rate reached 73 per cent in Bosnia and 70 per cent in Serbia.

– More than 55 per cent said that they are losing income due to the pandemic. The situation was worst in North Macedonia.

– More than 58 per cent said reporting on COVID-19 had affected their mental health.

– Most journalists said had the support of their employers when it comes to paid sick leave and adequate protective equipment.

– Roughly 40 per cent said the rate at which public officials failed to answer their question had risen during the pandemic.

– Officials in Serbia are the most restrictive when it comes to answering media questions, with more than half of respondents saying they rarely get answers. At the other end of the scale, 44.5 per cent of respondents in North Macedonia said they often received answers.

– The pandemic has not changed their communication habits. Journalists in the region still predominantly use phone and email, followed by Viber and WhatsApp. Almost 14 per cent said they use Signal, which is considered more secure.

Living standards have long been a concern for journalists in the Balkans, since well before the pandemic.

On average, journalists in Serbia, North Macedonia and Bosnia earn less than the average wage in those countries, according to a study conducted in 2020 by the Association of Journalists of Serbia, UNS.

In the BIRN survey, 58 per cent of respondents ranked financial support as their chief need during the pandemic. For those in North Macedonia, the figure rose to 70 per cent, and in Bosnia almost 67 per cent.

More than 55 per cent of all respondents said that they are losing income due to the pandemic. By country, the highest rate – almost 82 per cent – was in North Macedonia, followed by Albania with almost 64 per cent. Some 37 per cent in Serbia said they were losing money.

Journalist associations have fought to at least save jobs.

“We managed to agree with the government a financial injection so that it can cover the expenses for the journalists’ pension and medical insurance, which was put into effect,” said Macedonian journalist Darko Duridanski of the Independent Union of Journalists and Media Workers, SSNM.

“The government has also helped the media outlets financially so we believe that this was a big reason why we did not see massive loss of jobs and other negative financial repercussions,” he told BIRN.

Most at risk are video journalists, who are less in demand given the rise in online communication and virtual press conferences.

In Serbia, there have been job losses, most notably at the local public broadcaster in the northern province of Vojvodina, where more than 100 people were laid off between October 2020 and January 2021, most of them on unsecure contracts hired via agencies. RTV Vojvodina saw its budget cut 1.7 million euros by the state in 2020.

“Those people worked the most in the field and risked their health,” said Darko Sper, the RTV Vojvodina union representative of the Nezavisnost [Independence] trade union. “The director even praised them, but it was not enough,” he told BIRN.

Sper said working conditions for journalists had deteriorated “since they are constantly on the front line. They are going in the field to report, from the COVID-19 facilities, doing live pieces on the street or having guests every day in the studio.”

According to the survey, workloads are up, with an average of more than 60 per cent saying they had more to do since the onset of the pandemic.

In Bosnia, 73 per cent of those surveyed said their workload had increased, followed by 70 per cent in Serbia.

“We worked three times more for the same or less money,” one journalist in Bosnia said in the survey, in which respondents submitted answers anonymously.

But the work is being done with the same resources.

“In addition to business challenges in the midst of the coming economic crisis as a result of the epidemic, the biggest problem in production itself was limited human resources relative to the intensity of production, which was significantly higher, and the amount of knowledge related to public health topics,” a Montenegrin media director said.

On the positive side, a majority of respondents were satisfied with how their employers handled protective equipment requirements or paid sick leave. A third said they were largely left to fend for themselves.

In total, 70 per cent said their employers provided protective equipment and almost 68 per cent said they were granted paid sick leave when they had to self-isolate or quarantine due to COVID-19.

Information even harder to come by

In terms of day-to-day work, the pandemic has limited opportunities for journalists to meet their sources in person and made it increasingly difficult to get information out of public officials.

Across the Balkans, efforts to investigate huge public spending to combat the novel coronavirus, often outside of normal public procurement procedures, have been stymied.

“The opportunity to meet personally with my sources because of the movement restrictions and difficulty in obtaining information from institutions, which do not hold press conferences, were among the biggest problems,” said a journalist from Albania.

Serbian journalists also encountered the most difficulty when it came to obtaining information from authorities. Roughly 53 per cent of those surveyed in Serbia said they rarely received replies from official sources to questions concerning COVID-19.

Of all respondents, some 40 per cent said that the number of questions that went unanswered had risen since the start of the pandemic.

In Serbia, the government formally sought to limit access to information via a decree issued on March 31 barring anyone outside the government and the COVID-19 Crisis Staff from providing media with information on the pandemic. The move triggered much criticism and the decree was rescinded.

Sper from RTV Vojvodina accused authorities in Serbia of exploiting the pandemic to limit scrutiny of unrelated issues, citing COVID-19 restrictions. But when it came to the country’s June 2020 election, which the ruling Progressive Party won in a landslide, those restrictions were lifted.

“When they needed elections, corona was not a problem,” Sper told BIRN. It was, however, when journalists and the public wanted to attend, for example, a debate on the ecological impact of Chinese [tire manufacturer] Ling Long in the [Serbian] city of Zrenjanin.

”Stress is nothing new to journalists, but the findings of the BIRN survey suggest mental health issues are piling up.

In total, almost 58 per cent said reporting on COVID-19 had affected their mental health. In Albania, the figure rose to 73 per cent. Journalists in Montenegro appear to be faring better, with 29 per cent saying they faced some mental health issues.

In research published in July by the Independent Union of Journalists and Media Workers, SSNM, in North Macedonia, 62 per cent of respondents said the crisis had badly affected their mental health, while 48 per cent said they needed professional psychological support.

In Kosovo, still finding its feet as an independent state since splitting from Serbia in 2008, journalists have had to grapple with a long-running political crisis on top of COVID-19.

This has left journalists in the young country with little time to think about their mental wellbeing.

“We are waiting for a third government to be formed since the pandemic started a year ago,” said Begolli Pustina of the AJK. “While journalists from all over the world have focussed on reporting only on the pandemic, our Kosovo colleagues have been forced to focus more on the constant political crises,” she told BIRN, adding that the scale of mental health issues facing journalists might only become clear later.

Will journalism bounce back?

BIRN also asked the journalists surveyed about how they and their employers have dealt with the scourge of misinformation during the pandemic, as well as how they have communicated with sources and obtained information.

According to the responses, only 34 per cent of newsrooms use a specific tool to fight disinformation or verify information.

In Albania, for example, a study by the Albanian Media Council and Konrad Adenauer Stiftung – ‘Media and information of the citizens in times of Corona’ – found that standards had dropped.

“The monitoring shows that Albanian media have regressed in the professional standards of news reporting,” the report stated. “To a large extent, the news produced in the Albanian media has been with unbalanced sources, unverified and, as a consequence, biased. It relied mainly on the statements of institutional and state actors, and for the most part the statements of these actors were considered news.”

The study noted a lack of investigative journalism during the pandemic.

In terms of security precautions, only 13.7 per cent of respondents in the BIRN survey reported using Signal – which is considered more secure – to communicate with sources. Most journalists rely on phone and email, followed by Viber and WhatsApp.

A large majority of the respondents – 68.7 per cent – said they believed the media landscape in their countries would be changed after the pandemic passes. That figure rose to 86 per cent in Albania, but dropped to 59 per cent in Montenegro.

Mila Radulovic of the Association of Professional Journalists of Montenegro, DPNCG, cautioned that many of the problems, while worse since the onset of the pandemic, had long been issues facing journalists in the Balkans.

“There is a great danger that due to the economic crisis, which is the consequence of the pandemic, a large number of colleagues will lose their jobs,” Radulovic told BIRN.

She lamented the working conditions in “most newsrooms”, but added: “We have been talking about it for years.”