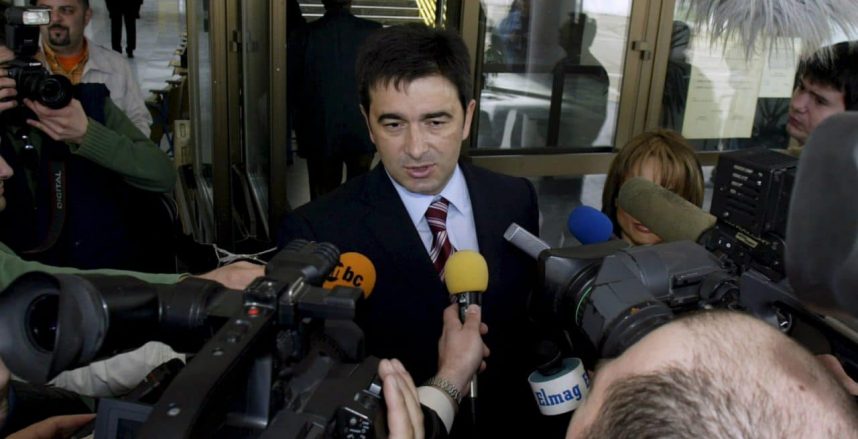 Nebojsa Medojevic. Photo: Boris Pejovic/EPA
Deputy ombudsperson says police failed to justify the reasons for publishing a video of Nebojsa Medojevic and his wife being moved to quarantine in March.

Montenegro’s Deputy Ombudsperson, Nerma Dobradzic, on Friday said police had violated the privacy rights of Democratic Front MP Nebojsa Medojevic and his wife Marina when they posted a video on Twitter of them being moved to quarantine.

The police directorate posted the video on March 17, which was then aired on the country’s public broadcaster, RTCG.

Deputy Ombudsperson Dobradzic said the police had failed to provide any objective reason that justified publication of the video. “Publishing a video or delivering it to the media without consent is an interference with the right to respect of a private life,” Dobradzic said.

Police defended their action, saying the event was filmed in a public space and that the faces in the video were kept blurred in order to protect the privacy of Medojevic and his wife.

But the Deputy Ombudsperson noted that the Police Directorate published Medojevic’s and his wife’s names in full in a press release, which they did not do when Navy chief Vesko Tomanovic, the mayor the resort of Tivat, Sinisa Kusovac, and an athlete, Srdjan Mrvaljevic, violated their self-isolation health measures.

The Ombudsman’s office has intervened before on complaints related to the pandemic. On April 1, Ombudsperson Sinisa Bjekovic noted that various citizens were complaining about the constitutionality and legality of the government implemented health measures.

On July 23, the Constitutional Court annulled a government decision to publish the names of citizens ordered to self-isolate during the coronavirus, though it did not rule that the government violated the human rights of citizens in doing so.

The government published the names on March 21 despite warnings from opposition parties and civic society organisations that it risked violating constitutionally guaranteed human rights.

The government said it had a right to publish the names because some citizens were not respecting self-isolation obligations. It also said it had approval for its actions from the Agency for Personal Data Protection.

It stressed that the security forces could not control every citizen who should be in self-isolation, adding that anyone who failed to self-isolate posed a threat to the entire community.

The Democratic Front is a constituent part of the For the Future of Montenegro coalition which, alongside two other coalitions, Peace is Our Nation and Black on White, narrowly won parliamentary elections held on August 30, ending the decades-long rule of the Democratic Party of Socialists, DPS.