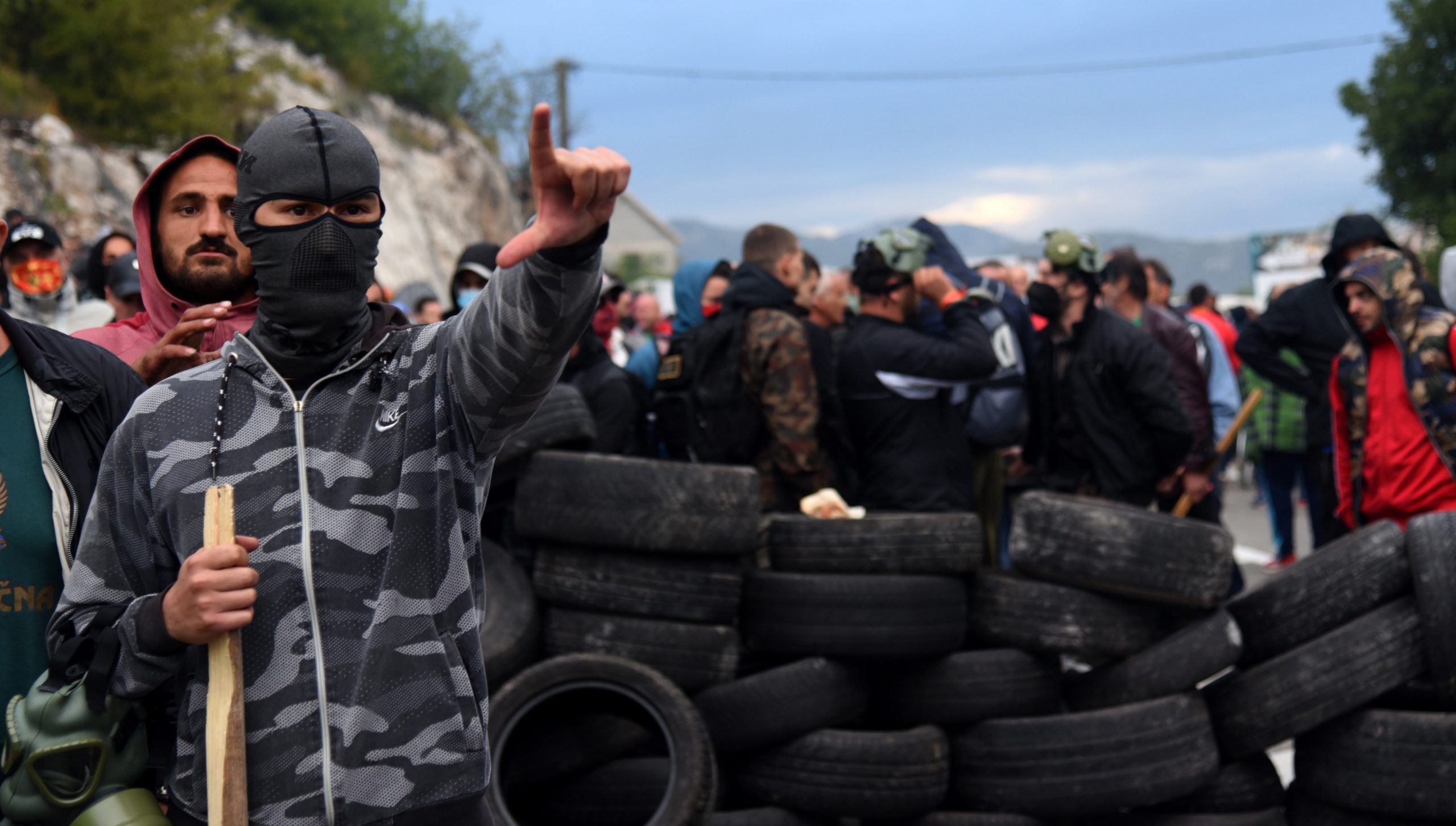 Demonstrators at a protest against the enthronement of a new Serbian Orthodox bishop in Cetinje, Montenegro, 5 September 2021. Photo: EPA-EFE/BORIS PEJOVIC.

The violent clashes over the enthronement of a new head of the Serbian Orthodox Church in the country have been clearly echoed on social media.

“Cetinje is our light of freedom … we are coming !!!” reads one of the tweets published on the eve of the divisive enthronement of a new Serbian Orthodox Church Metropolitan in Cetinje, the former royal capital of Montenegro.

The tweet was one of thousands published between September 4 and 5 as violent clashes between police and opponents of the event rocked the country, and led to accusations that the opposition was fomenting a coup against the new government elected last year.

“Komitas” is a nickname for Montenegrins who are especially fierce in their defence of Montenegro’s statehood, the Montenegrin language and Church, their name recalling the resistance to Montenegro’s union with the Kingdom of Serbia in the wake of World War I.

Montenegro remained united with Serbia until it regained independence in 2006.

During the weekend, the word “ustolicenje” was mentioned in tweets 1,374 times, “Cetinje” 3,042 times and “komite” 499 times. BIRN used a browser add-on Tweet archiver to extract tweets mentioning these key words.

The dramatic rise in use of the term “komite” is illustrated by the fact that in the first seven months of this year “komite” was used more than 1,100 times, slightly more than twice the number of mentions over the past weekend alone.

Whether the online dispute contributed to the weekend’s violent events in Cetinje is hard to tell. Nevertheless, the violence that erupted in Cetinje as opposition parties and self-declared patriotic groups battled police while trying to stop the enthronement of the new head of the Serbian Orthodox Church was clearly echoed on social media.

The phrase “Cetinje will not fall !!!!!” was tweeted 14 times, while “Next year in Cetinje” [referring to “Dogodine u Prizrenu” often used to illustrate Serbian nationalists’ wish to regain control of Kosovo] was tweeted four times.

The most retweeted and liked tweets were one in favour of the new Metropolitan’s enthronement, and another defending the protesters in Cetinje.

The first was posted by Mustafa Jusufspahic, Muslim mufti of Belgrade, in which he wrote: “I congratulate the [Serbian Orthodox] Church, my clergy, and followers of the SOC, on the enthronement of the worthy Metropolitan of Montenegro and the Littoral, Joanikije.”

The other was posted by Ivan Vukovic, mayor of the capital, Podgorica, blaming Prime Minister Krivokapic for what he believed was unnecessary police violence: “I appealed to, begged @profKrivokapic … In vain. He proved unworthy of his office and entered the history of Montenegro as the one who, fabricating Molotov cocktails, gave the order to run over Cetinje and, as never before, humiliate our state. You rejoice today, but you will be ashamed while you yet llive.”

Many tweeters shared videos documenting the clashes between protesters and police.

A war of words on social media in Montenegro, mainly between pro- and anti-Serbian factions, took off in 2019 and intensified after elections last year ousted the long ruling pro-independence Democratic Party of Socialists, DPS. It peaked this weekend, with more than 4,150 tweets in just 48 hours.

In August, BIRN published an investigation examining the rise in online hate speech in Montenegro that turned into offline violence on Sunday.

Searching Twitter for six specific terms or hashtags used, BIRN extracted more than 7,000 local-language tweets between November 1, 2019 – when the row over a disputed religious law took off – and July 19 this year.

The six terms and hashtags used were “osvjezilo” [refresh], “#nedamosvetinje” [roughly, “We won’t give up our shrines”], “komite”, “#nikadvise” [“never again”], “FCJK” [“Faculty for Montenegrin Language and Literature in Cetinje] and “#crnogorskoprolece” [“Montenegrin Spring”].

The results showed a continued significant rise in their use over the period monitored.

The enthronement of the new Metropolitan of Montenegro has angered members of self-proclaimed patriotic organizations, called “komitas”, and members of the opposition parties, who claim that holding an event with strong Serbian connotations in the old royal capital is an insult to Montenegro’s “centuries-long struggle for sovereignty”.

In April, self-proclaimed patriotic organisations were already organising protests against the new government, in which pro-Serbian parties play an important role, accusing it of undermining Montenegro’s statehood.

The outgoing Bishop of Budimlja-Niksic was elected the new Metropolitan of Montenegro at the Bishops’ Council of the Serbian Church in Belgrade on May 29, to succeed the late Metropolitan Amfilohije, who died of coronavirus infection last year.

Montenegro, which declared independence in 2006, is a multi-ethnic society, deeply split between those who consider themselves Montenegrins, those who identify as Serbs and various other smaller groups.