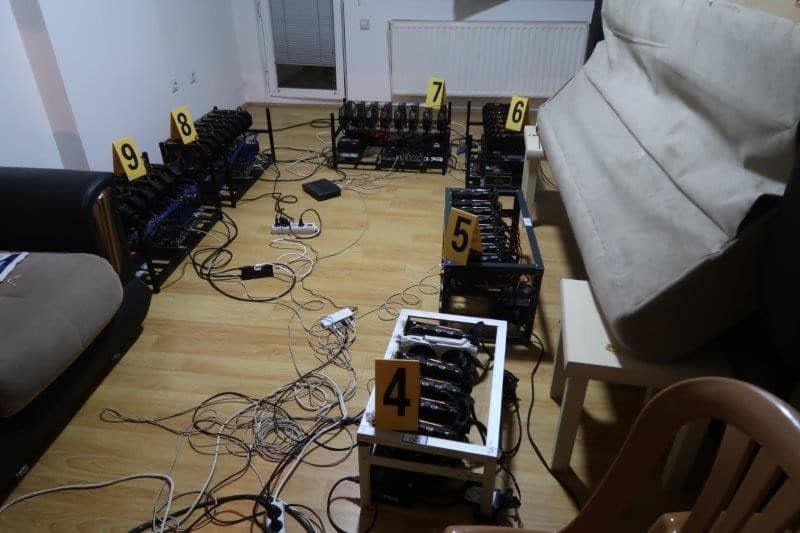 A week after the Kosovo government banned crypto-currency mining, partly to save energy, police on Thursday said they had confiscated 70 items of crypto-mining equipment in two locations.

In two different operations in Mitrovica South and Podujeve municipalities, Kosovo Police seized 70 items of crypto-mining equipment as part of raids following the ban on crypto-mining announced by the government last week.

In the first operation, in Mitrovica South, 67 crypto-producing machines were confiscated, Police said they identified the location in an apartment where investigators found a suspect dealing with “illegal activity”

In the second case near Podujeve, police seized three pieces of crypto-mining equipment.

“We have informed Customs officials and we will take subsequent action in coordination with them,” a police press release said.

No actual arrests, in either case, were reported.

Last week’s decision by the government to ban cryptocurrency mining, citing concerns about energy in a country with an energy crisis, has drawn questions concerning its legal basis.

The Minister of Economy, Artane Rizvanolli, announcing the ban on cryptocurrency mining, referenced emergency measures for electricity protection imposed by the government on December 24, to “restrict the energy supply, valid for a maximum of 60 days”. The government implemented power reductions on December 22 due to the serious energy crisis.

But Arber Jashari, a Kosovo-based legal expert, told BIRN: “There is not enough of a legal basis for the ban of cryptocurrency mining, considering that no special law regulates this issue.”

While the government has the legal basis to take restrictive measures on electricity, there appears to be no legal framework to ban cryptocurrency mining.

On October 2021, Kosovo announced it had drafted a law on cryptocurrency which parliament was expected to adopt by the end of the last year – but the regulation is still pending.

The chairman of parliament’s Committee on Economy, Ferat Shala, was cited as saying that most activities related to cryptocurrency were registered in northern Serb-run parts of Kosovo.

This phenomenon in the north, and associated energy costs, according to him, had pushed the committee to accelerate the drafting of a law to regulate the sector.

“The good thing about this is that all operators in this sector will know that we are working and monitoring and that at some point they will be subject to applicable law,” he was quoted as saying.

BIRN previously reported on how attics, basements, garages and even whole houses in Serb-majority northern Kosovo were being rented out for cryptomining, mainly because for 22 years, northern Kosovo has paid nothing for electricity, the vital component of crytomining.