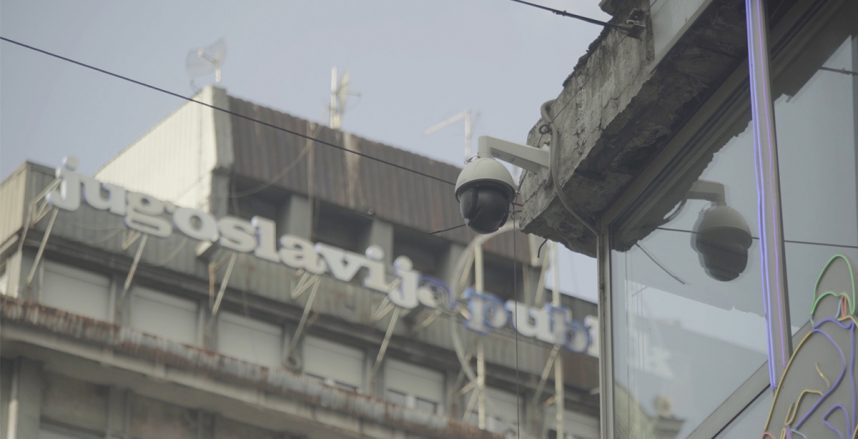 Serbian citizens have launched the website hiljade.kamera.rs as a response to the deployment of state-of-the-art facial recognition surveillance technology in the streets of Belgrade. Information regarding these new cameras has been shrouded in secrecy, as the public was kept in the dark on all the most important aspects of this state-lead project.

War, especially in the past hundred years, has propelled the development of exceptional technology. After the Great War came the radio, decades after the Second World War brought us McLuhan’s “global village” and Moore’s law on historic trends. Warfare itself has changed too – from muddy trenches and mustard gas to drone strikes and malware. Some countries, more than others, have frequently been used as testing grounds for different kinds of battle.

Well into the 21st century, Serbia still does not have a strong privacy culture, which has been left in the shadows of past regimes and widespread surveillance. Even today, direct police and security agencies’ access to communications metadata stored by mobile and internet operators makes mass surveillance possible.

As appearances matter most, control over the flow of information is a key component of power in the age of populism. We have recently seen various developments in this context – Twitter shutting down around 8,500 troll accounts pumping out support for the ruling Serbian Progressive Party and its leader and the country’s President Aleksandar Vucic. These trolls are also frequently used to attack political opponents and journalists, exposing the shady dealings of high ranking public officials. Reporters Without Borders and Freedom House have noted a deterioration in press freedom and democracy in the Balkan country.

However, a new threat to human rights and freedoms in Serbia has emerged. In early 2019, the Minister of Interior and the Police Director announced that Belgrade will receive “a thousand” smart surveillance cameras with face and license plate recognition capabilities, supplied by the Chinese tech giant – Huawei. Both the government in Serbia and China have been working on “technical and economic cooperation” since 2009, when they signed their first bilateral agreement. Several years later, a strategic partnership forged between Serbia’s Ministry of Interior and Huawei, paving the way to the implementation of the project “Safe Society in Serbia”. Over the past several months, new cameras have been widely installed throughout Belgrade.

This highly intrusive system has raised questions among citizens and human rights organisations, who have pointed to Serbia’s interesting history with surveillance cameras. Sometimes these devices have conveniently worked and their footage is somehow leaked to the public, and in some cases, they have not worked or recordings of key situations have gone missing, just as conveniently. Even though the Ministry was obliged by law to conduct a Data Protection Impact Assessment (DPIA) of the new smart surveillance system, it failed to fulfil the legal requirements, as warned by civil society organisations and the Commissioner for Personal Data Protection.

The use of such technology to constantly surveil the movements of all citizens, who are now at risk of suddenly becoming potential criminals, has run counter to the fundamental principles of necessity and proportionality, as required by domestic and international data protection standards. In such circumstances, when there was no public debate whatsoever nor transparency, the only remaining option is a social response, as reflected in the newly launched website.

“Hiljade kamera” (“Thousands of Cameras”) is a platform started by a community of individuals and organisations who advocate for the responsible use of surveillance technology. Their goals are citizen-led transparency and to hold officials accountable for their actions, by mapping cameras and speaking out about this topic to the public. The community has recently started tweeting out photos of cameras in Belgrade alongside the hashtag #hiljadekamera and encouraged others to do so as well.

The Interior Ministry has yet to publish a reworked and compliant Data Protection Impact Assessment (DPIA) but the installation of cameras continues under sketchy legal circumstances.