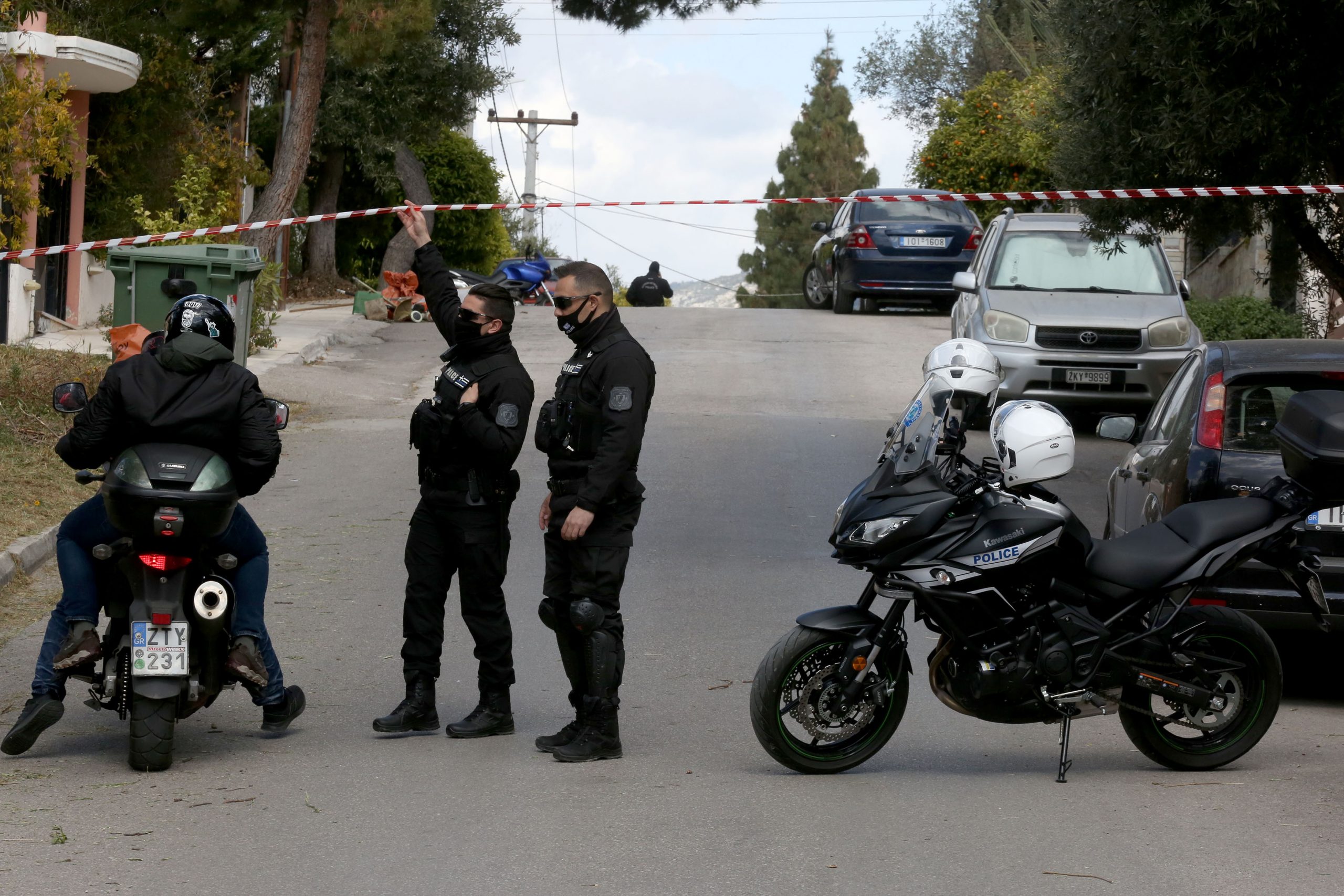 Police officers cordon the area outside the home of Greek journalist Giorgos Karaivaz after he was murdered in Alimos, on the southern coast of Attica, Greece, 2021. Photo: EPA-EFE/ORESTIS PANAGIOTOU

Police are stepping up searches for the killers of Giorgos Karaivaz, as leads suggest two teams may have been involved in what looks like a carefully planned contract killing.

Greek police are intensifying efforts to locate the perpetrators of last Friday’s execution-style” killing of the veteran crime reporter Giorgos Karaivaz, shooting him dead outside his house in the southern Athens suburb of Alimos.

Investigators are leaning to the possibility that two different teams were involved in the street slaying. The first team likely monitored the reporter’s movements after he left STAR TV channel, where he had taken part in a daytime show, and then informed the second team, who waited in the area on a motorcycle and executed the crime.

A CCTV video camera appears to show two riders some seven minutes before the attack. The driver can be seen wearing a helmet while the second driver, who according to witnesses hopped off the bike and shot the reporter as he got out of his car, is wearing a khaki hoodie, sunglasses and a mask.

Karaivaz took a total of ten bullets, six in his chest. According to reports, he was also shot twice in his head, verifying a passersby’s testimony that, once he fell to the ground, he received the final hit from the assassins before they got away.

According to media outlet Kathimerini, police believe the Beverly scooter used in the attack had been stolen, and have created a log of motorbikes of the same type reported stolen from their owners lately.

Police have been also trying to locate the safe house of the perpetrators. Investigations are focused on hotels and Airbnb apartments in the southern suburbs of Athens, but also on recent arrivals at Greece’s airports and across the land borders. For the moment, the lead scenario appears to be that the two perpetrators were brought from abroad for the hit, and left afterwards.

On Saturday, the Prime Minister, Kiriakos Mitsotakis, tweeted: “The assassination in cold blood of Giorgos Karaivaz has shocked the entire society,” adding that he met with the Minister of Citizen’s Protection, Michalis Chrisochoidis, to urge him to help solve the case.

But Mitsotakis has received criticism for only responding to the news of the assassination some 24 hours after the attack. His tweet came hours after various media freedom watchdogs, such as the Committee to Protect Journalists, and foreign officials, including the President of the European Commission, Ursula von der Leyen, had already condemned the attack.

Former prime minister and opposition SYRIZA party leader Alexis Tsipras also criticized the government, saying that “those who were campaigning for law and order have let the country be converted to a colony of organised crime and uncontrolled action of gang mafias”.

Speaking on TV, the deputy Minister of Citizen’s Protection, Lefteris Oikonomou, said a series of similar-style assassinations in the last three years suggested that some form of “open war” has been going on.

On the website bloko.gr that he founded and managed, which focused on crime and police authorities, Karaivaz had reported on more than ten assassinations that have taken place since 2018 and are attributed to conflicts between different gangs for supremacy. The authorities have been studying his laptop, his car and his mobile phone, reportedly also hit by a bullet.

Karaivaz’s funeral meanwhile took place on Sunday in Kallifytos, a village just outside Drama, where his only son, Dimitris, 19, said: “My father believed a lot in people and he loved them. He believed in a second chance”.

“Of course, we want the people that killed him to be caught, so that they will not kill someone else in future,” he added.

“But my father would forgive them for killing him, and would look for the reason behind this and wouldn’t want this event to terrorize society – a society that fights for freedom and equality,” he concluded.