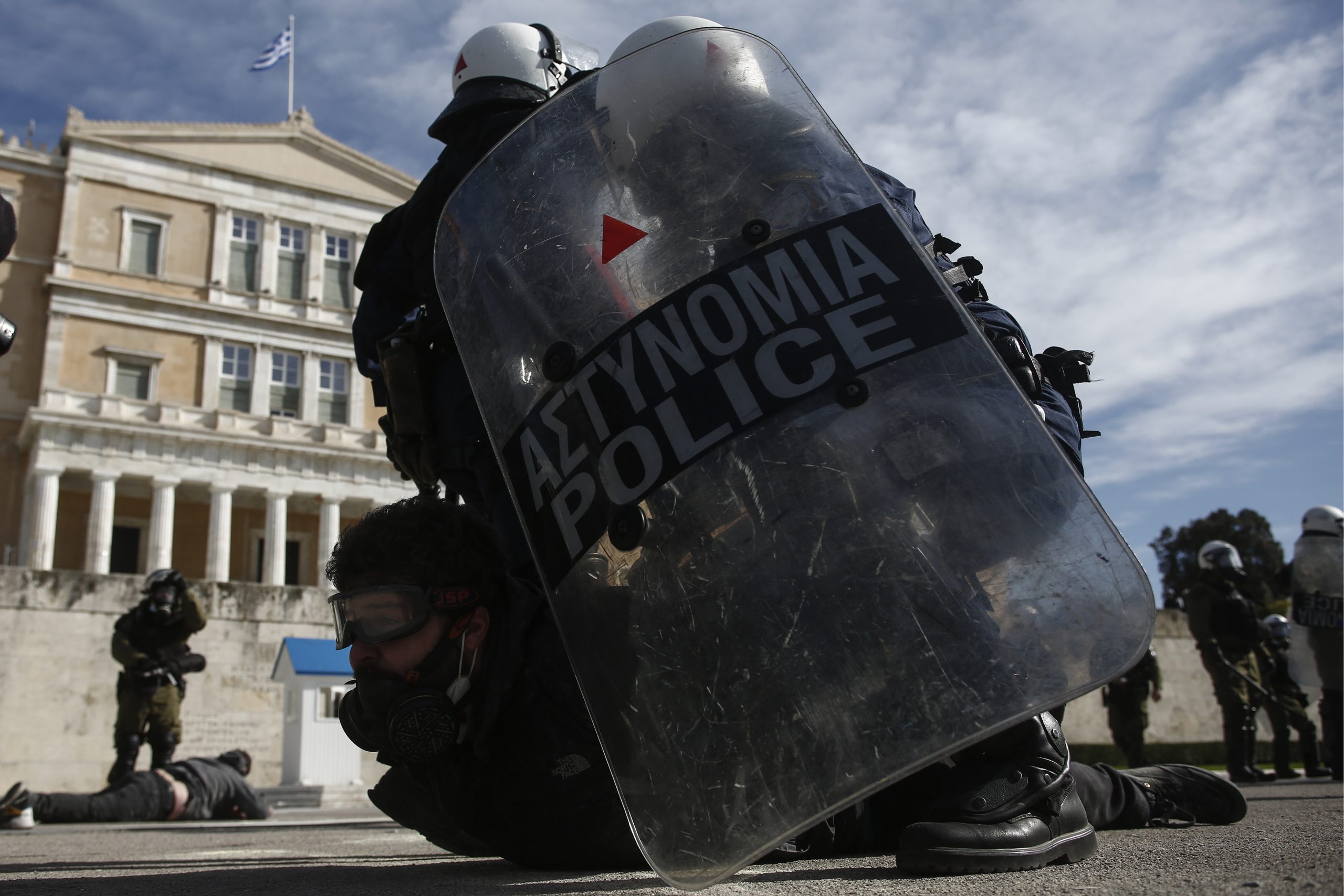 Riot policemen detain a protester during clashes following a rally against the new bill on higher education in front of the Greek Parliament in Athens, Greece, 2021. Photo: EPA-EFE/YANNIS KOLESIDIS GREECE OUT

Journalists’ unions, politicians and protesters have accused the police of grossly over-reacting to people demonstrating against a new higher education law.

Police in Greece have been criticised after videos circulated on social media of officers violently pushing and shoving photojournalists covering a protest against a new bill for universities on Wednesday.

The photojournalists’ union said riot police beat up a member of the union who had been reporting on the protests.

It added that one day before, police tripped up photojournalists covering another protest,­ this time in support of Dimitris Koufontinas – another union member, jailed on November 17 last year – now on hunger strike demanding transfer to another prison.

The new bill among other things allows police to maintain a presence on university campuses. A law withdrawn in 2019 long prohibited police from entering university grounds in Greece, in memory of those killed in 1973 when the military regime violently crushed an uprising at the Athens Polytechnic.

Niki Kerameus, the Education Minister, says the problem of security on Greek campuses has become acute and current lawlessness is forcing Greek students to study abroad.

Outside the Greek parliament, during the debate on the bill, a group of some 200 people, drawn from the main protest of some 5,000 protesters, clashed with riot police, who used tear gas to disperse them. Police took 52 individuals into custody.

Konstantinos Zilos, a photojournalist covering that protest, complained to BIRN of the police’s “dangerous repression” of citizens and media professionals.

Besides the incident involving the beaten-up photojournalist, he added, “the police a number of times have prevented our work, cutting our access without reason and blocking our cameras with their hands or bodies”.

Alexandra Tanka, a reporter for in.gr, told BIRN that a 21-year-old photography student “was surrounded in a glimpse of an eye by the riot shields and suddenly cut off from his colleagues”. 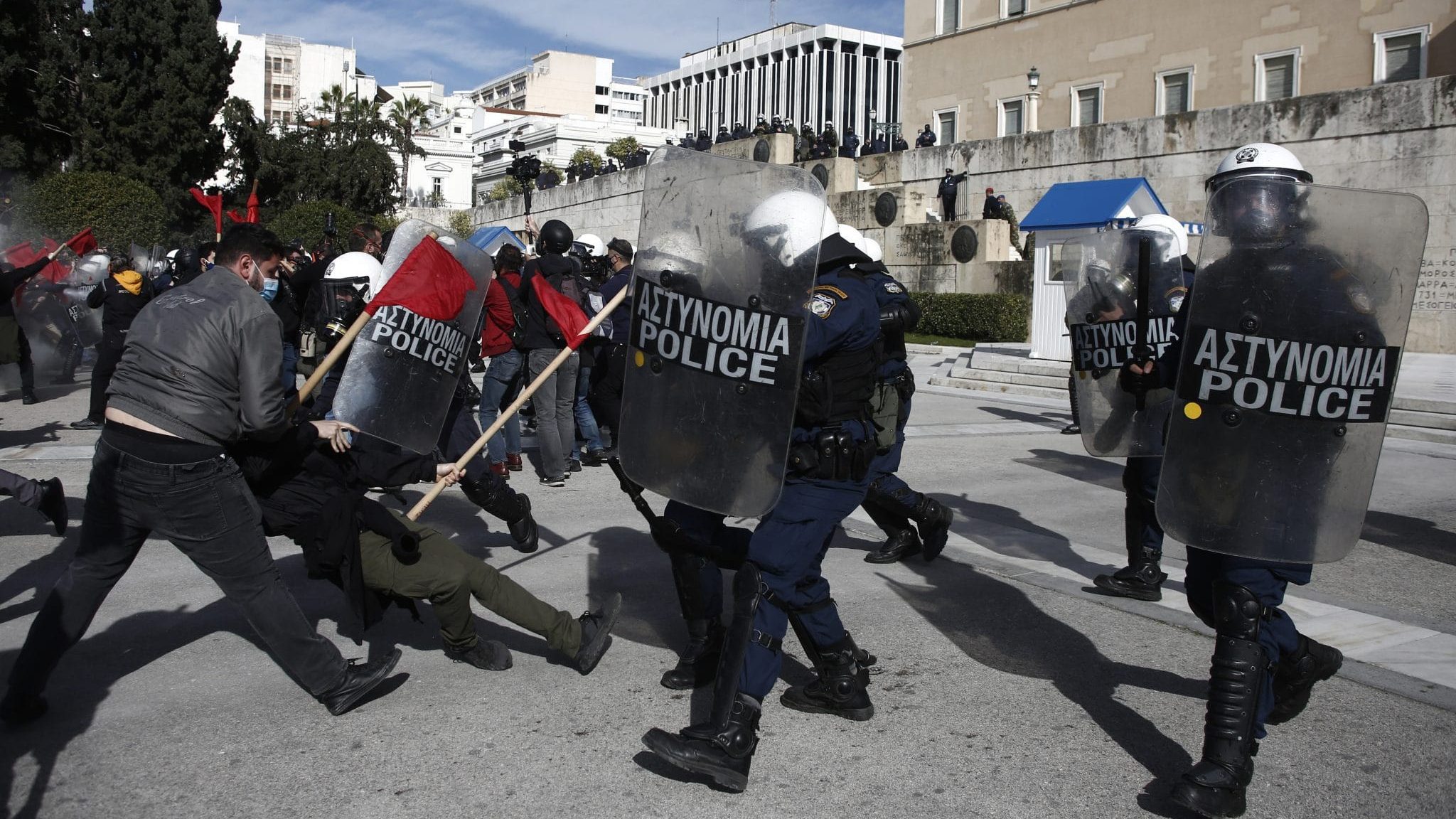 University students clash with riot police in front of the Greek parliament, during a protest against the new draft bill on higher education in central Athens, Greece, 2021. Photo: EPA-EFE/YANNIS KOLESIDIS

The immediate intervention of photojournalists and reporters resulted in the police letting him free. “A photojournalist asked them why they were not arresting that person who seemed to also be a photographer, pointing to a policeman holding a camera recording the demonstration,” Tanka recalled.

But not everyone was as lucky as the photography student, she said. “Students were beaten up and had to spend the night behind bars. According to reports, a girl was beaten up so badly that she was injured in the head and had to be hospitalized to get stiches.”

Nikos Markatos, former dean of the National Technical University of Athens, told the private radio station Real FM that police “were jumping on pavements with their motorbikes” and that one of these motorbikes had injured a girl, sending her to hospital – “the same hospital as my son, who was pushed, fell down and twisted his shoulder”.

Markatos said a third student who was hit on the chin with a fire extinguisher by a police officer at the protest, breaking his chin bone and some teeth, was sent to the same hospital.

Pictures shared on social media showed police violently attacking the protesters, sometimes hitting them after they had already been arrested.

Mera25, the party of former government minister Yanis Varoufakis, said Sofia Sakorafa, an MP for the party and vice-president of the Greek parliament, was also attacked by riot police outside police headquarters in Attica, where she was present when protesters were brought there on Wednesday evening.

The photojournalists’ union condemned attacks on journalists by police, saying that this was tending to become “a habit” and adding that the government had “a duty to inform us if freedom of press still exists”.

According to these rules, journalists covering protests now have to do their work from a certain area specified by the authorities, with the minister adding this was being imposed to protect the journalists themselves.

However, rights groups disagree. On February 2, the international Paris-based media watchdog Reporters Without Borders, RSF, in a report, warned that the new guidelines in Greece were “likely to restrict the media’s reporting and access to information”.

Commenting on the new guidelines, the former head of the photojournalists’ union, Marios Lolos, said that “in 99 per cent of such cases”, attacks on photojournalists covering protests do not come from protesters “but from the police”.